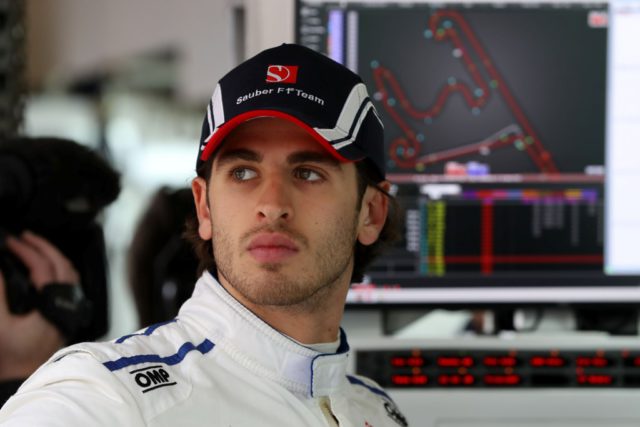 Antonio Giovinazzi will gain additional Formula 1 experience with Haas F1 Team. He will take the wheel of the VF-17 for the first practice session at seven grands prix in 2017.

The 23-year-old from Martina Franca, Italy, drove an F1 car earlier this year when he subbed for the injured Pascal Wehrlein at Sauber during the first week of winter testing at Circuit de Barcelona – Catalunya and again during the Australian and Chinese Grands Prix.

Giovinazzi begins his slate of FP1 stints with Haas July 14 at Silverstone as part of the British Grand Prix. He returns to the VF-17 in FP1 July 28 at the Hungaroring during the Hungarian Grand Prix. The next sessions will be on September 1 (Monza, Italy), September 29 (Sepang, Malaysia), October 27 (Autódromo Hermanos Rodríguez, Mexico), November 10 (Interlagos, Brazil) and November 24 (Yas Marina, Abu Dhabi).

Antonio Giovinazzi will gain additional Formula 1 experience with Haas F1 Team. He will take the wheel of the VF-17 for the first practice session at seven grands prix in 2017

Haas driver Kevin Magnussen will relinquish his seat for six FP1 sessions. His teammate Romain Grosjean cedes his racecar to Giovinazzi during FP1 in Mexico.

“In a year that’s already been filled with great opportunities, I’m proud to have another one with Haas F1 Team,” said Giovinazzi. “Being the third driver with Scuderia Ferrari is obviously a great place to be. Getting seat time in these FP1 sessions with Haas will keep me sharp. I’ll be able to take what I’ve learned in the simulator and apply it in actual race conditions. I’m proud of the faith Ferrari and Haas have in me and gracious for the seat time Kevin and Romain are sharing with me.”

“Antonio Giovinazzi earned a good bit of F1 experience during his two races with Sauber this year. These FP1 sessions with our team will allow him to develop even more,” said team principal Guenther Steiner. “He is highly regarded by Ferrari and performed very well last year in Formula 2. It’s a good opportunity for him and we’re happy to provide it. Credit also goes to Kevin and Romain for graciously sharing their racecars with Antonio.”

Ricciardo: The Baku circuit doesn’t suit our car but there are a lot of...