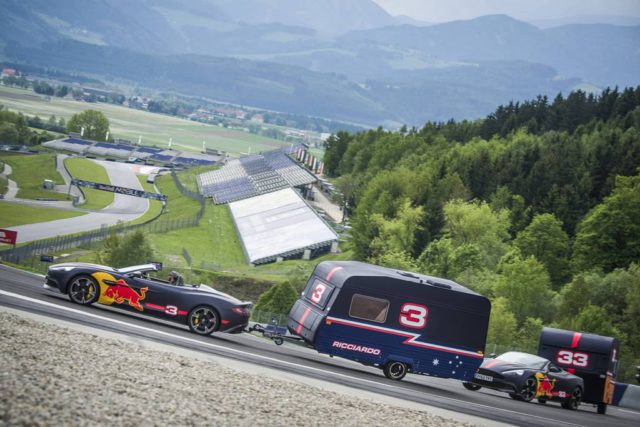 What do you get when you paint a couple of caravans in Red Bull Racing colours, add your race number, hitch ’em up to a couple of Aston Martin Vanquish convertibles with tow bars and race the crap out of them around the Red Bull Ring in Spielberg? Lots of fun, mayhem and a couple of very happy drivers!

Red Bull Racing drivers Daniel Ricciardo and Max Verstappen never miss the chance for a bit of fun. They took over the spectacular mountain to showcase exactly what F1 drivers would do if let loose in this situation.

After Monaco, time to light up the campfires and fire up the @astonmartin with Daniel and Max at the @RedBull Ring! ??? #AustrianGP pic.twitter.com/0YIsaJVtOe

“I wasn’t sure if it would be very controlled and just for the ‘glamour shots’ or if we could really have some fun. Fortunately, we got to have some fun,” said Daniel. “It’s like giving a little bit of a sweet to a kid. You want more, so we just kept pushing it until we lost the caravans. He was crying with laughter and so was I.”

Max added: “We were pretty sure that we were going to crash [the caravans]. It wasn’t on purpose but then I started drifting the car a bit and I could see in the mirror that the caravan was on one wheel!”

Nick Chester: Don’t expect to see too much use of the hard tyres in...