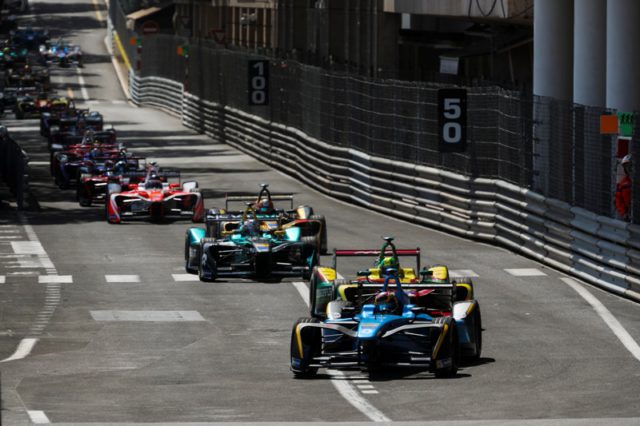 From his first Julius Baer Pole Position of the season, Buemi made a perfect start and soon established a comfortable lead over his title rival, who in turn was easing away from Nelson Piquet Jr in third.

The NextEV NIO driver had no such luxury, as the TECHEETAH of Jean-Eric Vergne was swarming all over him. The Frenchman was clearly anxious to make a move and stop the front two from getting away. He tried an ambitious move around the outside of the Turn 3 hairpin.

The cars were completely side by side and as they banged wheels Vergne crashed into the Tech-Pro barriers. Remarkably Piquet survived and only lost third place to the Mahindra of Nick Heidfeld. But Vergne’s car had heavy damage and the Qualcomm Safety Car came out.

After the success of the Abt Schaeffler Audi Sport’s tactical gamble in pitting di Grassi early last time out in Mexico, all the teams opted to follow the Brazilian into the pits for the mandatory car change during the caution period.

This was the prelude to a sensational finish that had the more than 18,000 fans who packed the grandstands on the edge of their seats. After using his FanBoost to briefly open up the lead to 1.6s, Buemi could only watch his mirrors as di Grassi homed in over the closing stages.

As they crossed the line to start the 51st and final lap, Buemi’s lead was down to just 0.4s, but despite having the leader in his sights, di Grassi couldn’t quite get close enough to attempt a passing move, and Buemi duly notched up his 10th win in the all-electric racing series, defending his Monaco ePrix crown in the process.

Buemi said: “In the first stint I managed to pull a little gap, but Lucas was using a bit less energy than me.”

“When the safety car came out we knew we had to try to learn from them [Abt] after what they have done in Hong Kong and Mexico by stopping very early, so that was the right call and then we knew it was going to be very difficult because to finish we would have to save quite a lot of energy. I managed to build a bit of a gap just to be safe and he played with me a bit because when we were passing the guys who were a lap down he consumed a little bit more than expected so I had to do the same. Then he did two laps where he kind of backed off, which was good for me, but in the end we both finished with nothing left.”

Second place for di Grassi meant that he minimized the amount of points lost to his main title rival – in fact the championship already appears to be a two-horse race as there is more than a 40-point gap to Buemi Renault e.dams team-mate Nico Prost who’s third in the standings.

Di Grassi said: “On the first stint the pace was not really there but we were saving much more energy.”

“In the second stint I was trying to keep up with him. I had around one per cent more than him, so I knew if I had the right strategy I could attack him in the end. The problem is here in Monaco there is nowhere to overtake and if you’re an experienced guy like Seb you know how to close the door. Also I would never go for a gap where you cannot overtake or I would risk all the race. If he’d left any door open, or any of the straights were longer than 360 metres, for sure I would have had a go.”

After making a superb start and perfectly picking his way around three cars through the first corner, Heidfeld had a relatively lonely run to third place. It was his first podium finish since the season-opener in Hong Kong back in October…

Heidfeld said: “It’s good to be back on the podium especially as we have been unlucky in the past two races. I tried to go through the start in my head and I knew there might be a train on one side and this could be a chance to overtake a lot of cars and obviously we know from two years ago how it can pan out in Turn 2 with cars flying over each other, so it was very important to get clear to get back into the line and it worked verY well and I managed to take three cars there. We’d discussed a lot about strategy and I said we just follow Lucas and that’s what we did and it was a good strategy!”

For almost the entire second half of the race, Piquet was in an intense battle for fourth place with Venturi’s Maro Engel, the second Mahindra of Felix Rosenqvist and di Grassi’s team-mate Daniel Abt

The quartet were never more than a couple of seconds apart, but the tight nature of the track meant that overtaking was almost impossible.

Andretti’s Robin Frijns was running eighth, but ran out of usable energy on the final lap and dropped out of the points. This promoted Esteban Gutierrez into eighth place and a second points finish in as many races for TECHEETAH.

Antonio Felix da Costa charged up the order in the early stages and crossed the line ninth. But later he received a 33-second time penalty for an unsafe release. This meant that, after running off the road in qualifying, Prost took ninth and the final point went to Mitch Evans for Panasonic Jaguar Racing.

It was a tough race for DS Virgin Racing

Jose Maria Lopez sustained front and rear wing damage in the opening laps contretemps, while Sam Bird was running seventh when he clipped the wall on the exit of the swimming pool. He limped his car back to the pits and finally rejoined three laps down with the aim of earning the bonus point for setting the Visa Fastest Lap, which he duly did.

There’s now just a single week until the FIA Formula E Championship returns with the Paris ePrix on May 20. Last year di Grassi won the race to re-invigorate his title charge.