M-Sport’s Elfyn Evans and Daniel Barritt made a sensational start to this year’s Rally Argentina. They claimed six stage victories on their way to the lead at the head of the classification on Friday. The Brits established a 55.7 second advantage over second-placed-man Mads Østberg – the Norwegian making it a one-two for the Ecoboost-powered Ford Fiesta WRC at the end of the day. Thierry Neuville with Hyundai was third. 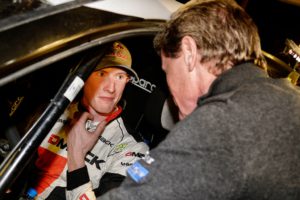 Elfyn Evans: “The car has performed really well and the driver’s not been too bad either!”

“It’s been a really positive day for us – everything has been working well and we got ourselves into a pretty good rhythm from the word go. I’ve really enjoyed the driving and what more can I say… The car has performed really well and the driver’s not been too bad either!”, Elfyn Evans said.

“We’re really glad to be here with no dramas and in such a strong position. But we need to remember that there is still a long way to go. The stages on Saturday are really nice, but quite challenging and we’re expecting another tough day out there which is always the case in Argentina.”

“But right now, it feels pretty good. Next, we just need to go out there and continue to enjoy it. We’ll try not to think too much about the result and just focus on ourselves as if it’s a brand new day.” 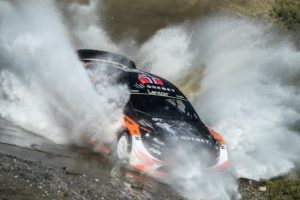 Østberg: “I really didn’t know what to expect, even if I felt the speed was good. Now I have got confirmation and we will continue working to go even faster”

Mads Østberg and codriver Ola Fløene are back in the hunt for podiums after nearly three months without competitive outings this winter.

“I had a good feeling before the start, but still a bit unsure of where we would find ourselves after the first stages as I have not competed since Sweden. But the day has been good and has confirmed that the development work we have done on the car, has been successful”, Østberg commented.

Eight special stages totalling 140 kms were run during the Friday, and Mads Østberg was inside the top six best times on all eight stages.

“The Friday result is a team effort. We have a small but competent team, and everybody is working in the same direction. I got a very good feeling during our test in Portugal in the beginning of April, when I felt that the whole team worked according to my own ideas for set-up of the car. We all have the same goal and that is to fight for podiums in the WRC, which is exactly what we are doing right now”.

Still Mads was very careful before Rally Argentina not to set his ambitions too high as he wasn’t able to compare himself to his opponents.

“I really didn’t know what to expect, even if I felt the speed was good. Now I have got that confirmation and we will continue working to go even faster. Saturday will be a long and tough day and tyre choice and strategy will be important, but we will push as hard as we can to stay in the fight for a podium”, he added. 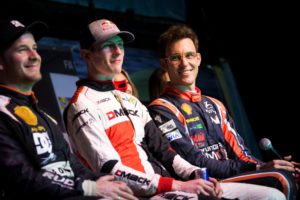 Neuville: “Argentina has always been a demanding event but that is the case even more so this weekend”

Neuville and Nicolas Gilsoul hit a stone in SS3, which caused a broken rear damper. They fought back to third and are now in a close battle for second overall with well over half the rally remaining.

Neuville commented: “We are pretty happy to end the day in third place overall considering just how difficult it has been for everyone. Argentina has always been a demanding event but that is the case even more so this weekend. We had a hard morning loop. A lot of things happened in the stages so we were pleased to make it to service. We picked up some damage to the rear damper, which meant we couldn’t push and didn’t feel as comfortable. The mechanics did an exceptional job over lunchtime to get all our team’s cars ready for the afternoon. Although it was still tricky, I felt better and we could make up some positions to keep firmly in the podium fight. There’s a long way to go!”

Honda Team all set for the 2019 Dakar Rally

Mercedes drivers happy with the beginning of their weekend