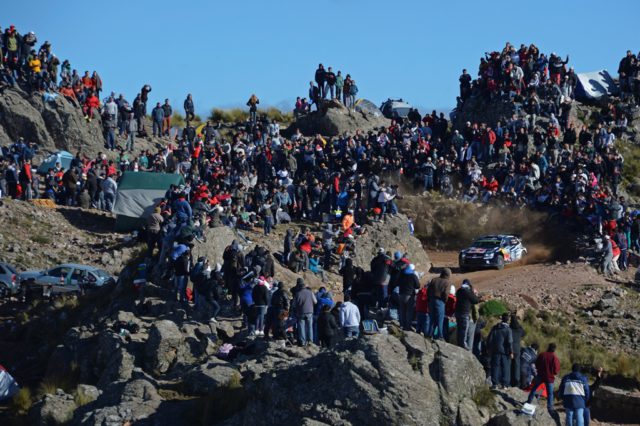 Red Bull TV presenter Mike Chen is something of an expert when it comes to rallying and Argentina: after all, he was there only three months ago, reporting on the Dakar Rally.

Mike landed in Villa Carlos Paz – the headquarters for this week-end’s Rally Argentina – a couple of days ago. This lakeside holiday resort also happens to be a traditional stop on the Dakar itinerary. Armed with his trusty reporter’s notebook (or do they use an iPad these days?), Mike kicked off the rally by playing a unique game of ‘spot the difference’.

So, what exactly do the Dakar Rally and Rally Argentina have in common, and what is different? Mike can tell us…

Steaks: “The steaks are massive! If you’re a hungry rally driver (or even a hungry TV presenter), you need the finest meat to keep you going. Argentinian food is absolutely mega: one of the things you look forward to most about coming to the country.”

Weather: “The weather is unpredictable. Even though the Dakar and WRC Argentina are three months apart, anything can happen, from sunshine to light snow. This week, the build-up to the rally has been pretty cold, so it should make for an interesting weekend.”

Amazing Fans: “Whether it’s Dakar or WRC, Argentinian fans are incredibly passionate: they just love motorsport in all its forms. The WRC rally hasn’t even started yet, and you can already see the camper vans and feel the enthusiasm!”

Commitment. “You need to swallow a big brave pill if you want to master the Argentinian stages, either on the WRC or the Dakar. You never know what to expect, with rough roads and changeable weather. These are some of the toughest stages in the world.”

Tactics: “You don’t win the Dakar by winning every stage, and exactly the same is true for the WRC event too. You have to think tactically and see the rally as a whole, whether it’s for three days or 14. The terrain will catch you out otherwise.” 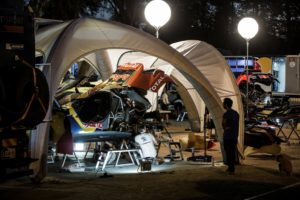 Sleeping Arrangements: “On the Dakar, you spend a lot of time in a tent or travelling from one bivouac (which means service park) to the next overnight. On the WRC, you sleep in a proper bed every night. Bricks and a roof over your head is pure luxury in comparison!”

Alarm Clocks: “The timetable is a little more civilised on the WRC. And you might actually wake to the sound of your alarm clock in the morning. On the Dakar, the alarm call is normally Sam Sunderland’s bike firing up at about 4:30am! Or earlier, if you’re unlucky.”

Passport & Visas: “You don’t need your passport on the WRC. Well, you obviously do to get there from abroad, but once you arrive the action all happens in one country. On the Dakar, we crossed through three countries – Paraguay, Bolivia and Argentina – in the space of two weeks!”

Base Camp: “The WRC service park is set up on the shores of the lake at Villa Carlos Paz, and now it stays there until the rally finishes on Sunday. On the Dakar, we were moving service camp – and TV studio – every night, which certainly made life interesting!”