Yamaha not only won the Argentinean Grand prix from the 2017 MotoGP championship – the team scored its 499th victory. Maverick Vinales and Valentino Rossi brought a double win and everyone had a reason to be really happy. 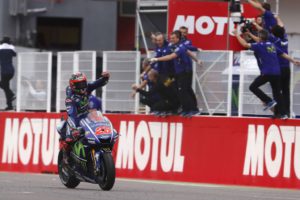 “We did a great job. We made the tyre decision already in the morning. I feel really great!”, a jubilant Vinales said. “The tyre’s grip level was really good the entire time. I feel pretty strong and Michelin is doing a great job, I feel really happy and confident. It’s like we are in a dream. I have to say thanks to the team, they are doing a great job, so let’s continue like that!” 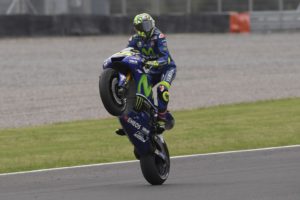 Rossi was as happy for his second place as if he had won the race:

“My mechanic, Brent, said to me on the grid “It’s the 350th, try to make it a good race”. I’m happy, because I was competitive today from the first to the last lap. I felt better physically, trained hard so I felt good on the bike and could push throughout the whole race. My concentration is good and also the battle with Cal [Cruchlow] was good also, because I was able to beat him. Unfortunately, Maverick was a bit faster, but this result is really important for me and the whole team, a Yamaha 1-2 is great!”

“I don’t think the results would have been different if I’d passed Cal earlier in the race. Looking at the lap times, Maverick was a bit stronger and that’s just the way it is today. This track is always tricky, also in the past we saw a lot of problems. Bumps and slipperiness and it also rained yesterday, so you have to pay attention and you also have to be lucky. For us this is good, because we took some important points for the championship and I also felt really good with the bike.”

“I love Argentina more and more…! The team can be really proud of the show they put on. Maverick delivered again! He gave an incredible performance, from the start all the way to the end and was in complete control of the race. Looking at the timesheet, you understand that he managed the race in a perfect way, never giving his rivals the chance to close the gap.”

“Valentino really brought things around. He had another strong ride, from further back on the grid, and showed he can always ride over the difficulties on race day. It hasn’t been an easy weekend for him, but he always worked hard to find solutions and his efforts speak for themselves when you see the results. We have capitalised on our major competitors’ misfortunes with this amazing 1-2 podium. It was another demonstration of power by Maverick; a great end to Valentino’s 350th Grand Prix start and this 1-2 finish also brings Yamaha its 499th victory. We are already looking forward to the next round in Austin!”