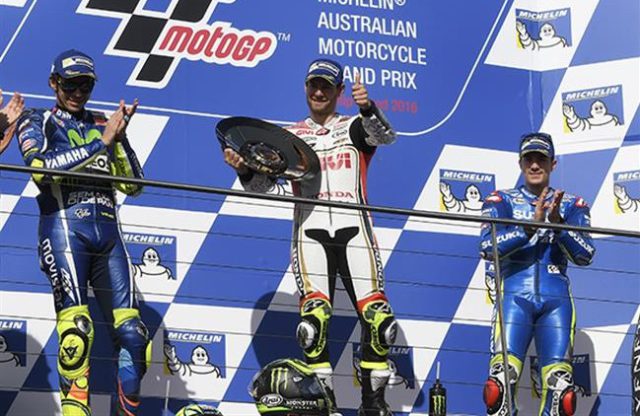 Crutchlow started from second place on the grid but dropped to fourth into Turn 1. As pole man Marquez quickly moved clear of fast-starter Pol Espargaro on the opening lap. Marc rapidly built a 3-second lead over Crutchlow. Cal had recovered to second, but the Repsol Honda rider fell under braking for Turn 4.

Marquez’s bike was severely damaged in the crash, consigning the Spaniard to his first retirement of the year. Crutchlow was running the Hard front tyre. He inherited a two-second lead over Valentino Rossi, who had launched a recovery from 15th on the grid. He picked off all the rivals across the opening laps.

However, rather than come under pressure from Rossi, Crutchlow pulled clear, with the gap stretching to as much as six seconds. Rossi also made an an error. The Yamaha rider ran wide at Turn 4.

Maverick Vinales also embarked on a fightback from a lowly grid spot as he became embroiled in a scrap for the podium with team-mate Aleix Espargaro and Ducati’s Andrea Dovizioso. Espargaró and Dovizioso swapped positions on a number of occasions before the Suzuki rider crashed out under braking for Turn 4.

Vinales, who had moved ahead of Dovizioso shortly before Espargaró fell, consequently pulled clear of the Ducati rider to finish on the podium. While early leader Pol Espargaró took fifth. Jorge Lorenzo made gains during the opening few laps but thereafter had a lonely run to sixth. Scott Redding prevailed in a fierce multi-bike scrap for seventh spot.

The full results from the race can be seen HERE

The season in Formula E so far – what’s the situation before the New...