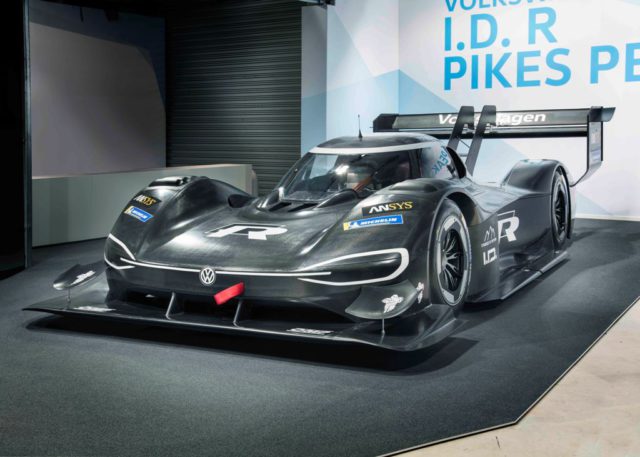 A new era for Volkswagen in motorsport: The brand unveiled its fully-electric super sports car, the I.D. R Pikes Peak With 500 kW (680 PS), 650 Nm of torque and weighing less than 1,100 kg, the super sports car will take on the iconic Pikes Peak hill climb in Colorado Springs, USA, on 24 June 2018. The goal: To beat the existing record of 8:57.118 minutes for electric cars at the “Race to the Clouds”. To achieve this, the I.D. R Pikes Peak will positively sprint into the future: 0 to 100 km/h in 2.25 seconds is faster than Formula 1 and Formula E cars. The I.D. R Pikes Peak was unveiled in Alès, France, before taking to the racetrack for the first time at its roll-out.

“Volkswagen’s goal is to reach the pinnacle of electromobility with the I.D. family. As such, Volkswagen’s involvement on Pikes Peak not only sets the trend for our future in motorsport but is also of great symbolic significance in the truest sense,” said Volkswagen Member of the Board of Management of the Volkswagen Passenger Cars brand with responsibility for Development, Dr. Frank Welsch. “Customers have always benefitted from the findings made in motorsport, and we expect to take these findings and use them as a valuable impetus for the development of future I.D. models. The hill climb on Pikes Peak will definitely be a real acid test for the electric drive.”

Unveiled? Unleashed? Both? However, the I.D. R Pikes Peak headed into the wild yesterday. Here’s our highlight clip of its great day. #ChargedToThePeak pic.twitter.com/BMQqTtIrhQ

“The car looks fantastic and has already been attracting a lot of interest from the media and on social media channels for a few weeks,” said Jürgen Stackmann, Member of the Board of Management of the Volkswagen Passenger Cars brand with responsibility for ‘Sales, Marketing and After Sales’. “This project shows once again that Volkswagen is on the right track with its major E-mobility strategy and the introduction of the I.D. family. The I.D. R Pikes Peak and the start at the most iconic hill climb in the world offers Volkswagen the magnificent opportunity to charge the topic of E-mobility, both emotionally and from a sporting perspective.” 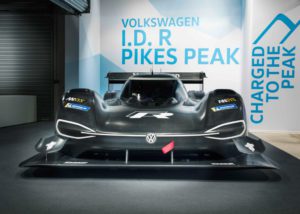 The top goal when developing the Volkswagen I.D. R Pikes Peak was to find the ideal balance between energy capacity and weight. The focus was not, as is usually the case with racing cars, on maximum performance. Volkswagen’s prototype for Pikes Peak justifiably bears two quality seals in its name. The “R”, which is synonymous with performance cars. And the “I.D.” – the symbol of Volkswagen’s smart E-technology.

“As with the Volkswagen brand’s production vehicles, fully-electric racing cars will also play an increasingly important role for us in the future,” said Sven Smeets, Volkswagen Motorsport Director. “The cooperation within the group really helped us, particularly given the tight schedule. For example, we received support from the Volkswagen battery plant in Braunschweig and worked together with the technical development department in Wolfsburg.”

As with the sensational twin-engine Golf that took on the Pikes Peak challenge in 1985, 1986 and 1987, the engineers have opted for a solution with two power units. The I.D. R Pikes Peak features two electric engines, generating a system capacity of 500 kW (680 PS). 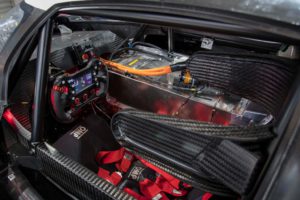 As in production vehicles with electric drive, lithium-ion batteries are used as the energy storage system. There is a great demand on the battery cells: Their power density is the crucial factor for the system when producing high voltage. Unlike in the manufacturing of production vehicles, the goal of the motorsport engineers was not maximum range, but the highest possible power output on the way to the Pikes Peak summit.

Roughly 20 percent of the electric energy required is generated during the 20-kilometre drive. The key here is energy recovery: When braking, the electric engines, which in this case operate as generators, convert some of the braking energy into electricity and feed this into the battery. 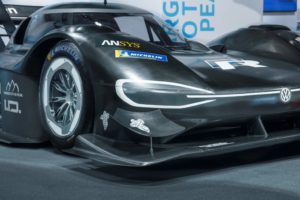 It is one of the peculiar challenges on Pikes Peak: there is a limit on testing on the 19.99-kilometre route of the hill climb in Colorado Springs. And tests are only possible on certain sections. For this reason, the bulk of the testing is not done on the actual route, but at racetracks. Volkswagen’s Pikes Peak programme enters the next phase with the unveiling of the car in Alès.

World-class driver and defending Pikes Peak champion, Romain Dumas, will be at the wheel of the Volkswagen I.D. R Pikes Peak for the attempt to break the existing record for electric cars. The 39-year-old Frenchman loves this kind of challenge: As well as three victories on Pikes Peak, he has also won the 24 Hours of Le Mans twice. Incidentally, Dumas, who names motorsport legend Jacky Ickx as his idol, was born in Alès.

Start at 2,862 metres above sea level, 1,440 vertical metres of climbing, 156 corners, 100 percent asphalt, and just one single attempt – not only must the technology and driver be on top form as they attempt to set a new record for electric cars on 24 June 2018, but the external conditions must also play ball. It is not unheard of for the 4,302-metre summit of Pikes Peak, which also represents the finish, to experience temperatures below freezing point at the end of June.