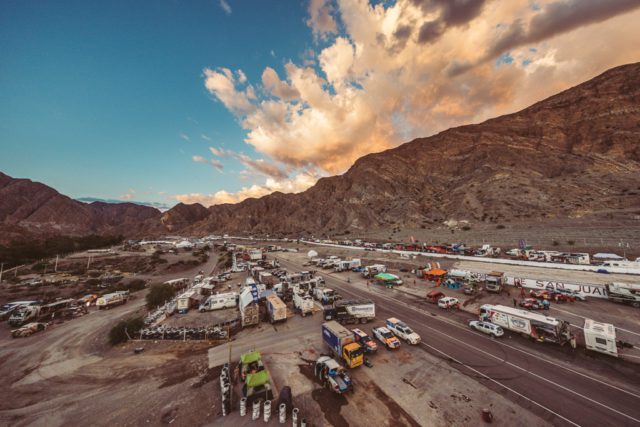 For its 40th edition, the 10th to be held in South America, the Dakar rally is revisiting the Pacific Ocean and the dunes of Peru, which drivers and riders will tackle sampling the delights of the capital, Lima. Competitors will then head through to Bolivia, for a welcome rest day in the festive atmosphere of La Paz. Argentinian aficionados top the podium when it comes to enthusiasm and good humour. And the most joyous of them will be waiting to acclaim the riders in Córdoba, host to the Dakar finish line for the first time.

“Coming back to Peru, and for longer than in 2012 and 2013, has given us the opportunity to explore unknown territory. Competitors will be faced with all the different sandscapes of the country, setting high standards right from the very start of the Dakar. The Bolivian stretch—physically demanding yet offering stunning landscapes – will test the adventurers to the limits of their endurance. But decisive challenges will still await them in Argentina, where the Dakar theoretically reaches its most difficult part with the Super Fiambala stage. This is where racers will need to stand out from the crowd if they hope to triumph in Córdoba”, says Marc Coma, Sporting Director of the Dakar. 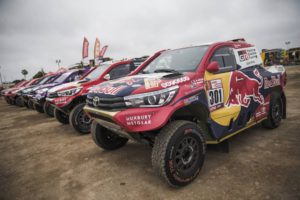 In Peru, racers are plunged from the outset into the sand, the overriding theme of this five-day stretch of the race. This little starter will simply whet the appetite of the most hardened experts. Everyone else will be well advised to make the most of this stretch to improve the specific reflexes needed to tackle this type of terrain. Finesse will already be required to negotiate a downhill section towards the shoreline of a lake.

Co-drivers in the spotlight

The Pisco loop stage is 90% off-piste. This exercise in navigation offers the car drivers the privilege of setting off before everyone else… And that means no bike tracks to follow. The risk of bogging is reduced by the relatively cool morning temperatures. But the canyons of the first 40 kilometres of special stage will not make for an easy ride, nor will the series of dunes that follows. 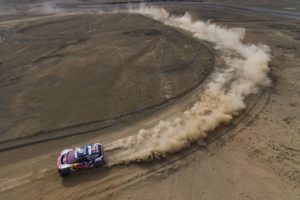 At this point, Dakar veterans will still be warming up. The day’s challenge will mainly be disputed off-piste, both across a chott and in the heart of the canyons. Bikes and quads will leave the main route for a fifteen-kilometre detour, without increasing the day’s total distance. Newcomers to the rally, some of whom will already have experienced some difficulties, will be starting to feel a little worse for wear by this stage!

The beach where the stopwatch is started lends itself perfectly to mass starts, with neat lines of 15 bikes and 4-abreast acceleration contests for the cars. After that the drivers will tackle one of the longest-ever sandy sections in the history of the Dakar. There will be a total of 100 km, with dunes of all sizes! This special stage is where certain racers will get ahead. Especially since the last canyon is a little tricky to find… 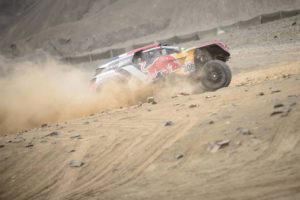 Each going their separate ways

Feature of the day: bikes and quads will take a separate route from the cars and trucks. The race will start at daybreak, and follow the two different sections of special stage on the programme. The crews will, therefore, be the first to discover the sands of Tanaka, traversing terrain such as the 30 or so kilometres of mountainous dunes. The road to Arequipa will be long for everyone. And there may well be some late arrivals at the bivouac.

Moving up a gear

The Dakar leaves Peru and the desert to take on the mountains. The route becomes faster, barely leaving enough time for a peek at the many lakes along the way. The second timed section will start on the shores of Lake Titicaca. The Bolivian Altiplano requires competitors and crews to adjust to racing at an altitude of 2,500 metres. The day off in the capital will help them acclimatise. 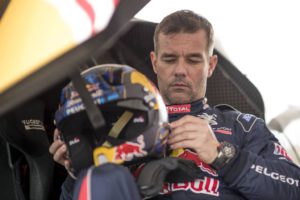 On the road again!

Upon crossing the border, a change of software is required, which racers and co-drivers will have to install without delay on their hard disks. Against this new backdrop, the daily mileage increases and the dunes temporarily disappear from the landscape. Vigilance is called for on these good tracks that make up most of the route to Uyuni. Once teams reach the barracks, the vehicles are left in the service park, though deprived of their assistance teams for this marathon stage.

Separating the wheat from the chaff

The second part of this marathon stage also includes the longest special stage of the rally, covering nearly 500 kilometres. Before leaving the Altiplano, the competitors will be put to a tough test. It will take place in high-altitude sand dunes 3,500 m above sea level. This should start to give us a better idea of the leaderboard; the handful of men or women capable of winning the Dakar will now be revealed. 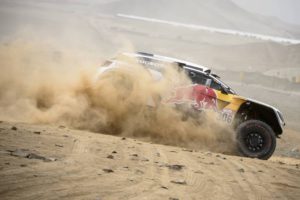 No room for error

An action-packed day lies ahead as the race enters Argentina. But the winner’s time will no doubt be one of the best of the fortnight. The route is windy in places, but fast as a whole. Those who manage to find their way through the rios of various sizes will also be able to keep a good time. Competitors need to drive confidently and avoid any errors if they are to avoid jeopardizing their place.

Navigation contest in the Rios

The Dakar has covered pretty much all of this region… but the dunes that the racers will have to ride on the vast sandy plateau during the first part of the day are a new addition. Along the way, they will cross the path of the assistance vehicles on their way to Belén… and, for the first time, these will be allowed to intervene during the special stage. But beware! Time is ticking! At any rate, this is a navigation contest that will be decided in the river crossings at the end of the special stage. 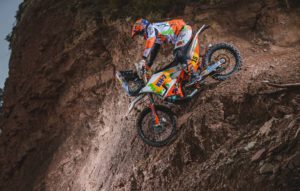 If the weather is particularly hot, reducing the firmness of the sand… This will be one of the toughest spots in Argentina… and potentially the place where a racer in good shape will be able to shine. Stéphane Peterhansel can attest to that. As in 2016, the previous day’s special stage times will define the starting order. In the evening, the bike riders will be staying in a separate bivouac for their second marathon stage.

Good physical management will be the key to success in this second marathon stage for the bike riders. Their arms will suffer from hundreds of twists and turns and stony sections. Car and truck crews will have to carefully keep to the road book. 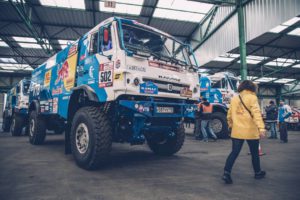 In this stage, car drivers will enjoy the dunes of San Juan at the start of their day… but will also have to cross an area of fesh-fesh, which will put their nerves to the test. Those familiar with the tracks of the Argentinian round of the WRC will then find the terrain to their taste. But drivers can still lose more than gain at this point. Throughout the history of the Dakar, many competitors have let the title slip through their fingers the day before the finish!

Focused to the very end

It’s time to celebrate — not only for the winners of the various categories but also for all of the adventurers who manage to complete the 40th edition. And it will happen in a city with one of the greatest passions for motorsports in the world. Before competitors can enjoy their “Fernando” — the name the “Cordobeses” give to the national cocktail — they will first have to cross around 30 rios. That’s just as many potential pitfalls. And it means that competitors cannot let down their guard until they have come to the end of the very last kilometre.

Di Grassi and Audi celebrate a historic win in Zurich

Green: Racing Point will be bringing updates to the car as soon as they’re...