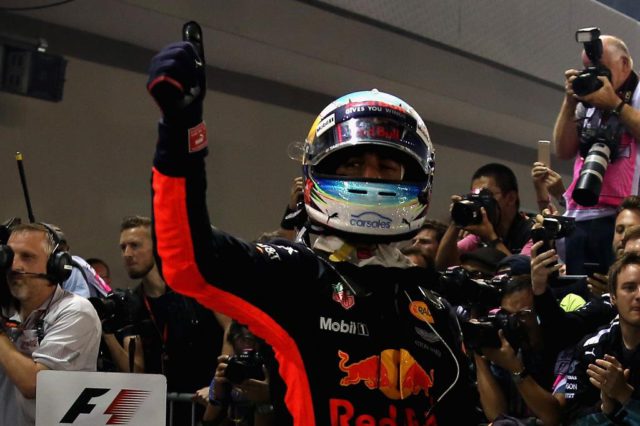 The next two stops in the Formula 1 calendar are the Malaysian and Japanese Grand prix. The race at Sepang will be the last there as the local organisers did not want another contract to host an F1 start. That is why Daniel Ricciardo is looking forward to that particular race. But in the same time he already booked a table in a Tokyo restaurant where he wanted to go last year!

“My victory last year in Malaysia was definitely unexpected. I really didn’t think our car was well suited to the track, but Lewis [Hamilton]’s problem opened the door and then I held off Max [Verstappen] in the closing stages to take the win. It just goes to show you never know what can happen”, Ricciardo explained.

“Set-up is always a compromise in Malaysia as you need a good car in the middle sector, but you also can’t afford to lose too much time on those long straights.”

“Then we move on to Suzuka with a quick stop in Tokyo. Tokyo is so unique and I love all the local food, I actually have a table booked at a sushi restaurant that I have wanted to visit since last year.”

That’s one way to cool off @danielricciardo ?? ?? #SingaporeGP #F1 pic.twitter.com/E09D6wXPa2

Ricciardo: “I have always loved Suzuka circuit, it’s tough for a driver and a proper racer’s track”

“The whole first sector is great fun. There is so much time to be gained there with the right set-up. Saying that, I think the last chicane is the most difficult corner on the track because you have to brake from such high speeds and really attack the car on the kerbs.”

“I can’t talk about Japan without mentioning the fans, we always get awesome gifts and you can see them in the grandstands dressed up in fully branded race suits and helmets which is pretty special to see.”

Max Verstappen also remembered the double Red Bull victory in 2016, as well as the wheel-to-wheel battle with his teammate.

“We gave each other just enough room which provided some good action for the crowd and a great result for the team”, he continued.

“Both Singapore and Malaysia are very hot and humid races. Being one after the other means you can at least tailor your training for those conditions. But it will still be physically tough. It’s also challenging for the pit crew in their overalls. They get very hot and I’m sure they also lose a few kilos over the weekend!”

“After Malaysia we will spend some time in Tokyo before heading to Suzuka. Japan is full of new experiences. It will be great to spend a couple of days exploring before the race weekend starts. Some people say the Japanese fans are crazy. But I think they are just very passionate about Formula 1, which for me is very nice to see.”

“My favourite corner is the fast Esses in the first sector. But it’s also the most difficult section of the track and you really have to concentrate on getting the set-up right.”

Alonso: Our pace wasn’t there all weekend in China

Hulkenberg: One small error at Hungaroring means the next corner is compromised