The 2019 WTCR – FIA World Touring Car Cup presented by OSCARO is set for a showdown in Sepang after Malaysia was added to the 10-event, 30-race schedule for the upcoming season.

The Sepang International Circuit was the home of the Malaysian Formula One Grand Prix from 1999-2017. It will host the WTCR OSCARO season two super-finale in 2019. The race will be a part of an exciting double-header with the FIM Endurance World Championship for motorbikes.

The FIA Touring Car Commission approved the calendar at a meeting in Paris on 6 November. Now, the FIA World Motor Sport Council ratified it during its meeting in St Petersburg (Russia). The calendar rcuits, plus challenging street tracks.

The all-new WTCR Race of Malaysia will form a fitting climax to what promises to be another all-action season. It will also run to a unique format with one of the three races taking place under floodlights at night.

With the Malaysian capital Kuala Lumpur on its doorstep, the Sepang International Circuit will represent a new challenge for the bulk of the WTCR OSCARO racers. Its 5.54-kilometre lap with two long straights will enable more overtaking. The variety of medium and high-speed corners is sure to create an impressive and memorable spectacle.

“We are delighted to include Sepang on the WTCR OSCARO calendar for 2019,” said François Ribeiro, Head of Eurosport Events. “Forming the deciding rounds of season two, the inaugural WTCR Race of Malaysia promises to be a very exciting addition to the schedule with the prospect of some great racing, including at night, at a venue untried by most WTCR drivers.

“As at WTCR Race of Slovakia, the FIM Endurance World Championship for motorbikes will also form part of the timetable in Malaysia. And as promoter of both the WTCR and EWC, Eurosport Events will offer a festival of entertainment for fans of two- and four-wheeled motorsport, which is almost unique on the international calendar. It’s also a great opportunity to gather categories from the FIA and FIM under the same umbrella.”

Soon there will be an announcement for the date of the Race in Malaysia.

Malaysia’s inclusion on the 2019 schedule means WTCR OSCARO will continue to be over 10 weekends for a total of 30 races. “Once again we’ve included events in Africa, Asia and Europe,” said François Ribeiro. “We’ve also focused on variety with all tracks offering a different driving challenge, whether it’s high-speed, medium-speed or tight and twisty layouts. The venues also offer a different character and fan appeal and we’ve built on a very successful first season with a similar 10-event, 30-race calendar, the wish of all WTCR teams.”

Marrakech continues as the curtain-raiser: The Moroccan city of Marrakech will continue to host the season opener. It will be at the semi-permanent Circuit Moulay El Hassan from 5-7 April 2019. The home event of WTCR race winner Mehdi Bennani has a long history of spectacular action. 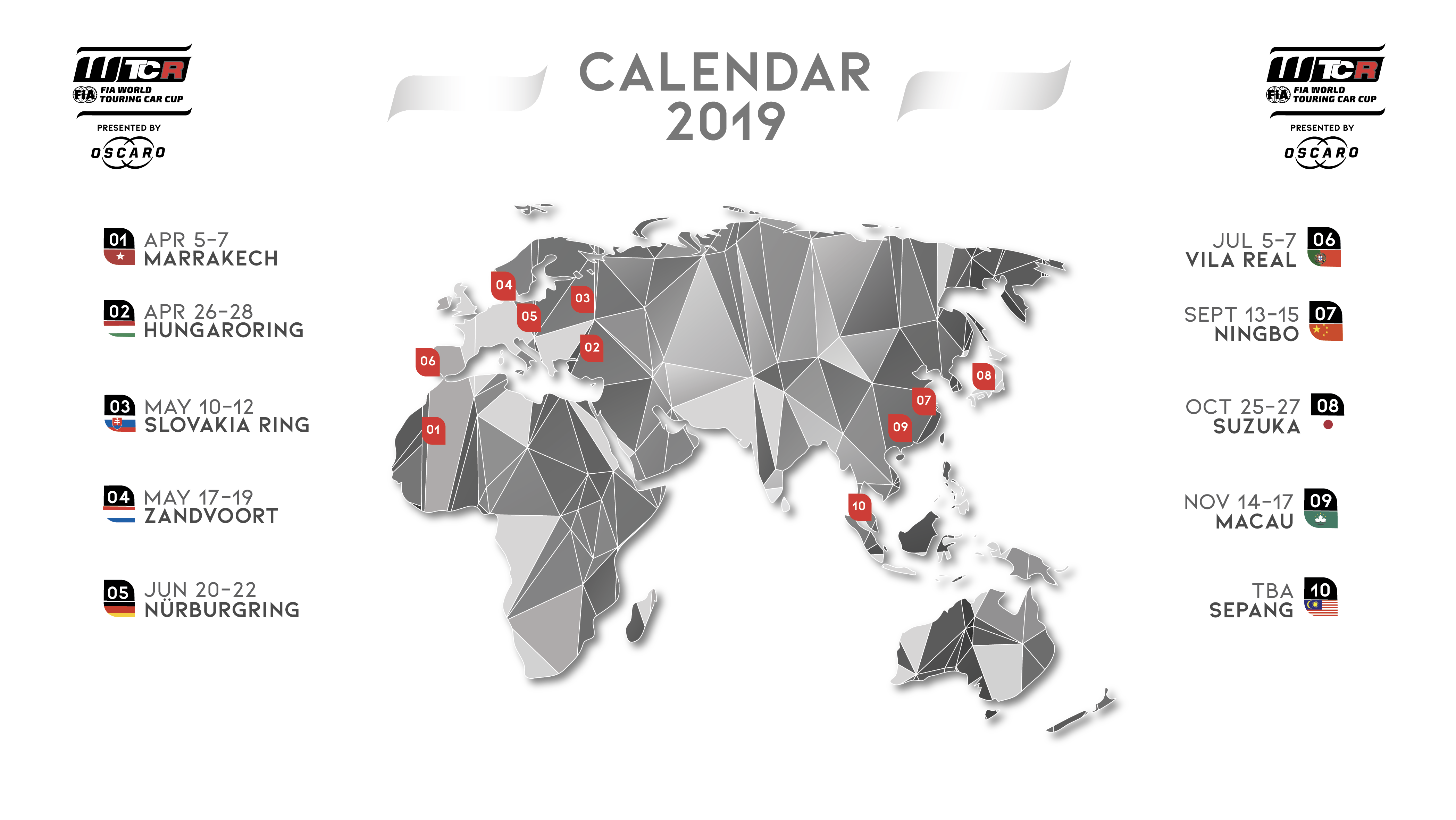 Several classic venues feature on the 2019 WTCR OSCARO calendar. Circuit Zandvoort, which sweeps through the sand dunes of the North Sea coastal town west of Amsterdam, welcomed 110,000 fans to the first WTCR Race of Netherlands last May and returns from 17-19 May.

The Nurburgring Nordschleife, the world’s longest and toughest race track at 25.378 kilometres, follows during Germany’s biggest motorsport event, ADAC 24h-Rennen week in June. Vila Real’s ultimate street course is next up from 5-7 July, a week later than in 2018.

Suzuka (25-27 October) and Macau (14-17 November) complete the list of classics. Suzuka will also stage the Super Formula finale – Japan’s premier single-seater series. Meanwhile, Macau was the setting of the thrilling 2018 season showdown. It has the status of the most challenging street track on the planet.

The Hungaroring, close to Hungary’s capital Budapest, brings WTCR racing to the masses from 26-28 April with thousands expected to fill the grandstands to watch home hero Norbert Michelisz in action. WTCR Race of Slovakia is next from 10-12 May. Fans will see action on four wheels as well as two via the FIM Endurance World Championship.

China time: WTCR OSCARO will once again visit China, the world’s largest car market. Ningbo, which belongs to the Geely Group – the parent company of new WTCR customer racing brand Lynk & Co – gets the honour of hosting the action from 13-15 September. Despite the low spectator attendance in 2018 due to race day being declared a working day ahead of the Golden Week celebrations at short notice, the venue proved to be a great track for touring car racing.

Ogier’s aim for Italy is to extend his championship lead