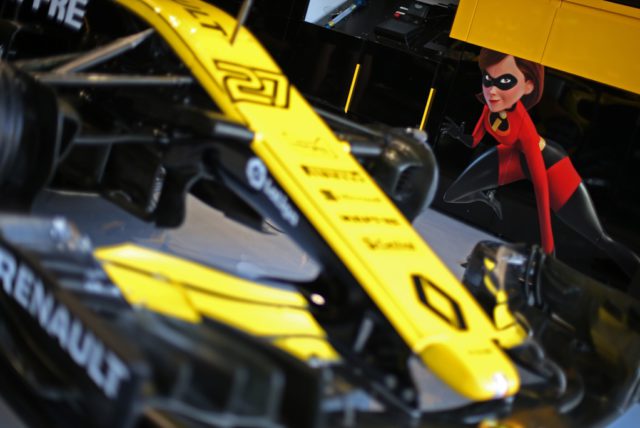 Renault Sport Formula One Team is partnering with Disney/Pixar ahead of the release of ‘Incredibles 2’ on 13 July over the British Grand prix weekend and Goodwood Festival of Speed.

In Incredibles 2, Helen (voice of Holly Hunter) receives a call to lead a campaign to bring Supers back. Meanwhile, Bob (voice of Craig T. Nelson) navigates the day-to-day heroics of ‘normal’ life at home with Violet (voice of Sarah Vowell), Dash (voice of Huck Milner) and baby Jack-Jack – whose superpowers are about to be discovered. Their mission is derailed, however, when a new villain emerges with a brilliant and dangerous plot that threatens everything. But the Parrs don’t shy away from a challenge, especially with Frozone (voice of Samuel L. Jackson) by their side. That’s what makes this family so Incredible.

Incredibles 2 releases in the UK on 13 July

Renault Sport Formula One Team’s 2018 challenger, the Renault R.S.18, will feature Incredibles 2 branding on the front wing. The distinctive red of the film’s central characters is a bold flash on the engine cover. Incredibles 2 branding will also be visible within the team’s garage throughout the race weekend. Social media and press activities will follow over the weekend, with a specially-branded Renault Sport Formula One Team E20 2012 V8 powered car also on display on the Renault stand in the FanZone throughout the weekend.

“It’s a privilege to partner with Disney Studio UK for the UK launch of one of the biggest animated films of all time. Renault Sport Racing always seeks to perform on and off track in a number of innovative and original ways and Incredibles is a huge worldwide franchise. We hope the superhero powers translate to us this weekend!”

“It’s just cool to be on the podium in Austin”, Daniel Ricciardo said