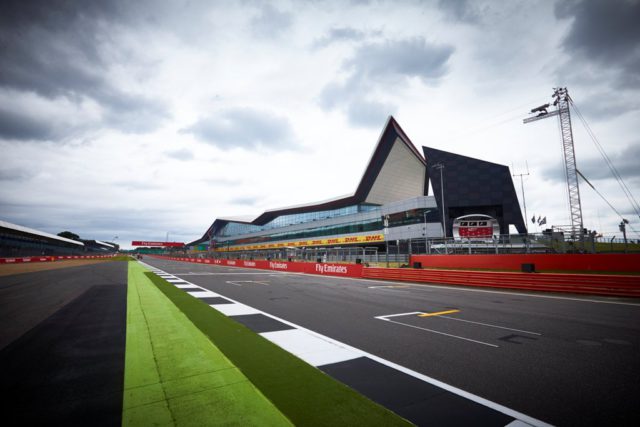 The British Grand prix is the tenth round of the 2018 Formula 1 world championship.

With an average speed of around 230 kph (143 mph), Silverstone is considered a power circuit and one of Formula One’s fastest tracks

The majority of its layout is comprised of medium- and high-speed corners. That allows drivers to run at full-throttle for 70 per cent of their lap. Teams run medium to high levels of downforce to better assist with the impressive cornering speeds. These downforce levels are achievable because the circuit has relatively few long straights. Its sweeping corners provide overtaking opportunities, albeit tricky ones due to the speeds drivers can achieve.

DYK, Part I? The iconic gold trophy awarded to the winner of the British Grand Prix is the RAC Cup, and it is the oldest prize awarded in Formula One. Unlike other trophies, the winner doesn’t get to keep it. It’s returned soon after the podium celebration. 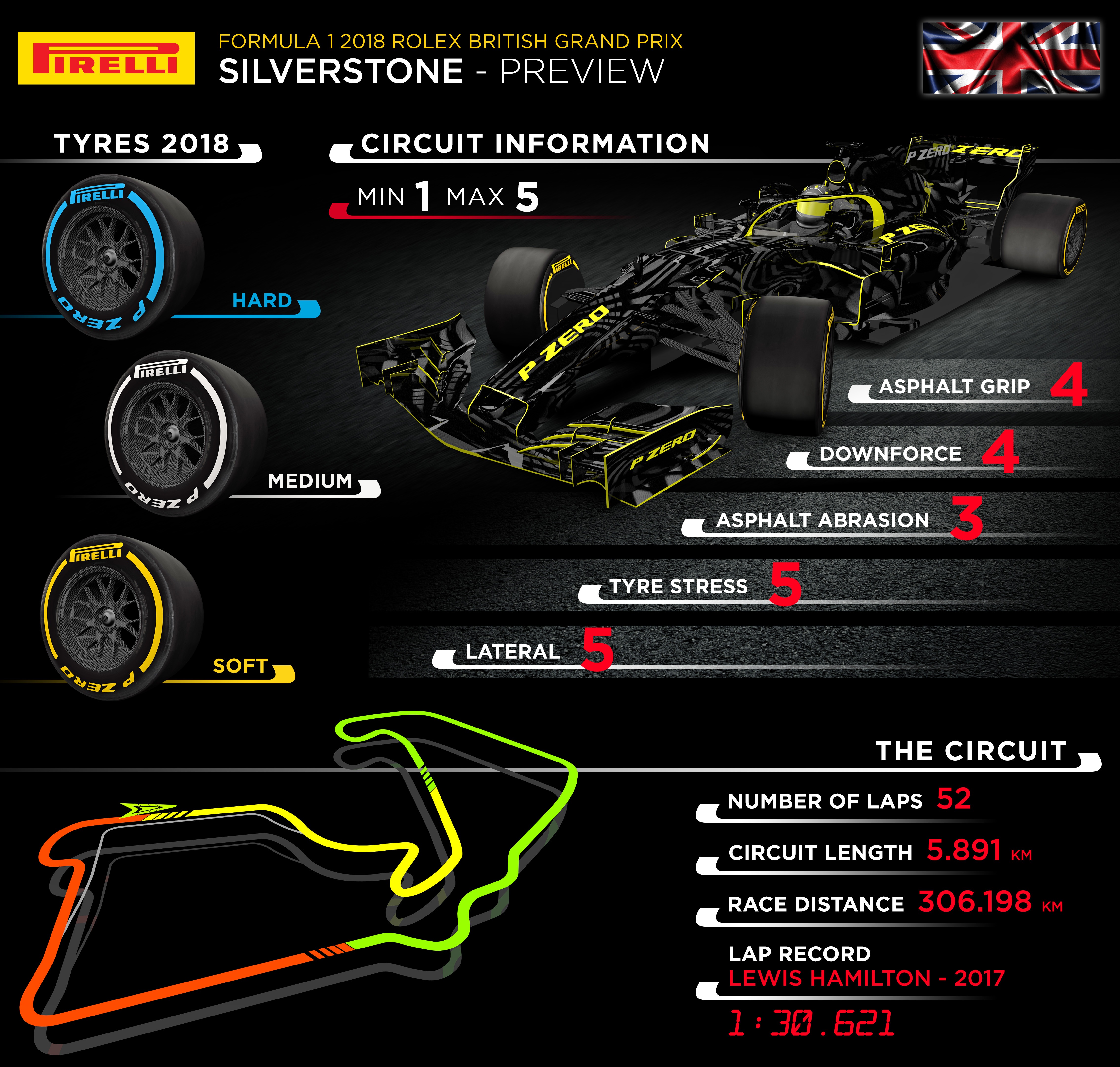 DYK, Part II? There are 18 turns at Silverstone, and each has its own name and backstory

Abbey (turn one): This flat-out first turn was named after the ancient Luffield Abbey, the remains of which were found near the corner. The abbey was founded prior to 1133 and suppressed by King Henry VI in 1493.

Farm (turn two): This is a lazy left-hander and the point where cars enter back onto the track from the pits. The origins of its name are simple – the straight used to pass close to a nearby farm.

Village (turn three): One of the new corners introduced in 2010 following Silverstone’s redevelopment, this right
hander is named after Silverstone Village, which lies to the north of the circuit.

The Loop (turn four): This is the only corner at Silverstone named for its shape. Drivers navigate it at 95 kph (60 mph).  This is the slowest corner on this high-speed track.

Aintree (turn five): Famous for hosting the Grand National horse race, Aintree also staged the British Grand Prix in the 1950s and early 1960s. And, in tribute, the left-hander leading onto the Wellington Straight now bears the venue’s name.

Wellington Straight: Formally known as the National Straight, the run down to Brooklands was renamed in 2010 when it became part of Silverstone’s new grand prix layout

The Wellington Straight takes its name from the Wellington bombers that were based at the Northamptonshire circuit during World War II. Fittingly, the straight is formed from one of the old runways.

Brooklands (turn six): In the days of pre-war motor racing, Brooklands was Britain’s No. 1 venue. It makes sense that one of the corners at the modern-day home of British motorsport is named in the old track’s honor.

Luffield (turn seven): Like Abbey, the long right hander was named after Luffield Chapel. Introduced to Silverstone’s grand prix layout ahead of the 1991 race, Luffield was originally two distinct corners, known as Luffield 1 and Luffield 2.

Woodcote (turn eight): The Royal Automobile Club (RAC) was responsible for organizing the first major races at Silverstone. As such, the group had a major influence in naming many of the track’s original corners. Woodcote, the
sweeping right-hander which used to end the lap, is named after Woodcote Park, a RAC-owned club in Surrey.

Maggotts, Becketts and Chapel (turns 10-14): Approached at around 300 kph (186 mph), Silverstone’s fastest and most iconic sequence of corners was three distinct bends until 1991

Today, they are interlinked. The opening section, Maggotts, was named for nearby Maggot Moor. Becketts and Chapel Curve, meanwhile, take their names from the medieval chapel of St. Thomas à Beckett, which was built in memory of the murdered Archbishop of Canterbury and once stood near the corners. The chapel buildings were demolished in 1943 to make way for Silverstone airfield.

Hangar Straight: Silverstone’s use as a Royal Air Force base meant that it was once home to several large hangars. Two of the largest stood next to what became the circuit’s backstraight. Today it is tackled at more than 325 kph (202 mph).

Stowe (turn 15): Situated at the end of Hangar Straight, the rapid right-hander has always been a challenge for drivers despite several changes over the years. Like so many other corners at Silverstone, it takes its name from a nearby landmark. That is Stowe School, which lies just south of the circuit.

Vale (turn 16): Built on an airfield, Silverstone is more or less flat, which is why the most undulating piece of track, found between Stowe and Club, was named Vale. That is another word for valley. However, some say the name is simply a reflection of the fact this portion of the track sits within the district of Aylesbury Vale.

Club (turns 17-18): Club is the track’s final corner. Like Woodcote, Club was named in honour of the RAC’s famous clubhouse in Pall Mall, London. 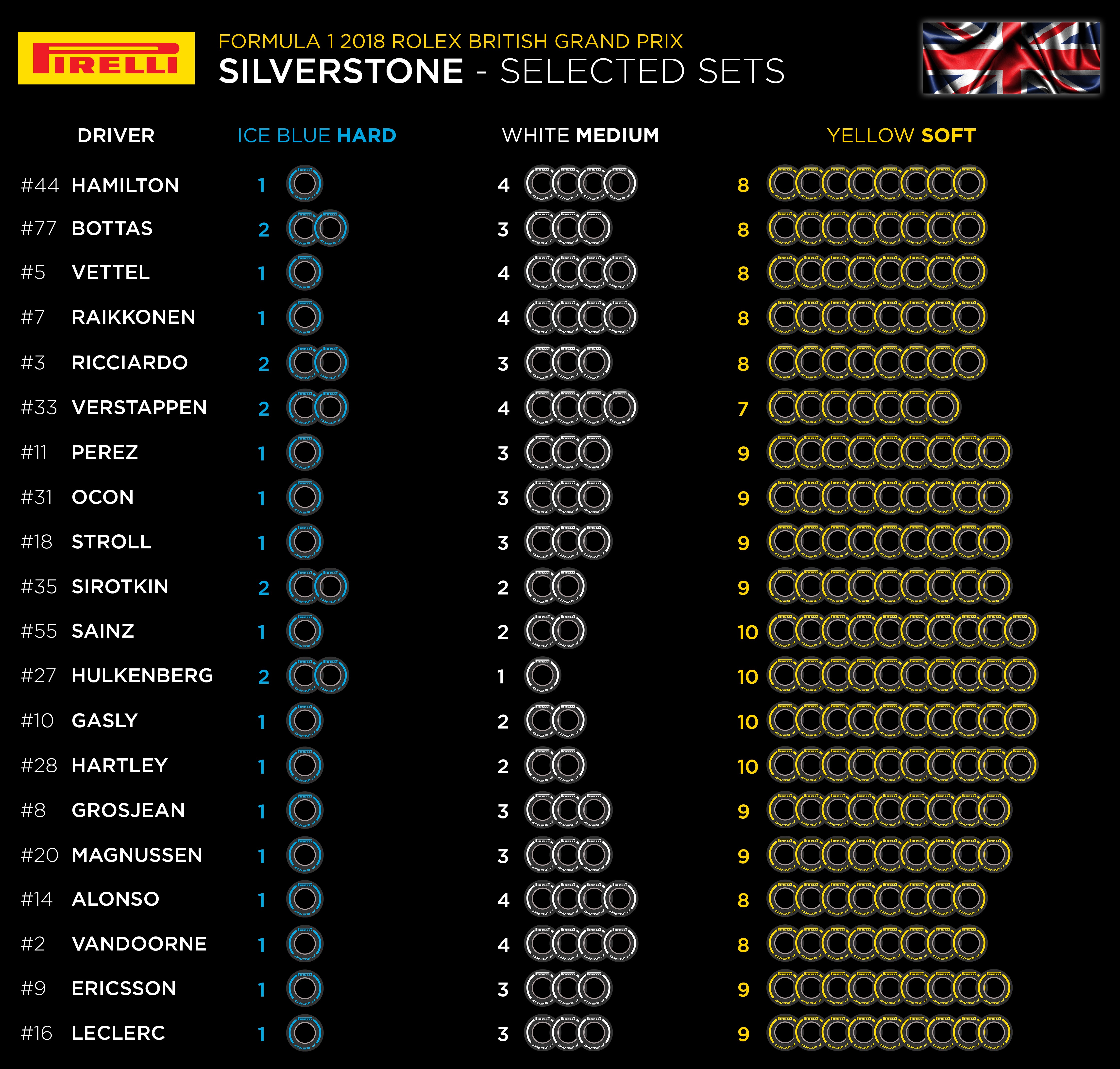 Taken in eighth gear, with an apex speed of 295km/h (183mph), this right-hand corner requires total commitment from the drivers. In qualifying it’s possible to take it flat-out, depending on your car’s set-up, while in the race – when the car is heavy with fuel – it usually requires a slight lift of the throttle.

Focus points High-speed balance. With an average speed in excess of 240km/h (150mph), Silverstone is one of the fastest circuits on the Formula 1 calendar. Ten of the 18 corners are taken at speeds in excess of 160km/h (100mph). Turns 10-14 (Maggotts-Becketts) make up one of the most iconic sections of track in the world. All of the corners – three left, two right – are taken in sixth gear or higher and the drivers don’t use the brakes.

The track has been re-laid since last year, using the same asphalt that’s used in Barcelona and Paul Ricard. The teams don’t yet know how it will affect tyre wear or grip levels. But the experience at the Spanish and French Grands Prix suggests lap times will be much faster. For that reason, Pirelli is bringing its hard compound rubber to a race for the first time in 2018.

Braking Low. Silverstone is one of the easiest circuits of the year on brakes, which are used in only nine of the 18 corners. That equates to just 10 per cent of the lap – the lowest of the season. Still, over the course of the 52-lap race, the drivers will apply 56 tonnes of brake pressure. That is equivalent to four times the weight of Big Ben’s bell.

Power The cars use 2.2kg of fuel per lap, which is just above average.

Aero Medium downforce. There are a lot of high-speed corners at Silverstone, which encourages the engineers to take off downforce. But they can’t go too low with aero grip. Because the car still needs to perform at low-speed through the Arena, Luffield and Club sections.