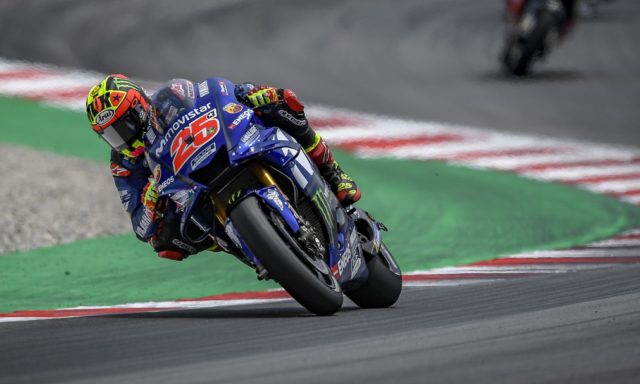 Maverick Vinales won the battle of the soft-tyre laps at the end of today’s MotoGP second free practice at Assen. He finished a tenth ahead of Andrea Iannone with Danilo Petrucci in third.

But reigning world champion Marc Marquez showed ominous pace on a hard/hard combination. He put in almost a full race distance and still ending eighth on the combined timesheet without switching to the super-grippy soft rear Michelin.

Marquez did 17 full laps on the same tyres, setting his best of 1:34.041 on the third and then, after a couple of near crashes.

He stayed in the 1’34s for the rest of the session save for one trip into the 1:35 min and he was only seven-tenths slower than Vinales overall.

Vinales, who is trying a clutch travel sensor to help with appalling starts, did an early run on the hard rear matched with a medium front and set 11 laps in the 1:34 min. While team-mate Rossi, who finished fourth overall, completed seven in the 1:34 min.

Compatriot Iannone was much less consistent. He experiments with a new chassis while Petrucci, also on a development GP18 frame, did ten 1’34s on the same hard rear.

Cal Crutchlow completed his day’s work on a medium front, setting a best lap of 1’33.812 which put him fifth overall, one in front of Andrea Dovizioso. The Italian is another on a development chassis – this one with carbon reinforcements – to find more tyre life which isn’t exactly a big issue for the 2017 runner-up.

Jorge Lorenzo rebounded from his FP1 crash to finish in seventh place and 0.492s off the pace but he was only 0.171s quicker than 2019 team-mate Marquez. Alex Rins was in the top three early doors but slipped back to ninth while Johann Zarco’s bounced back from a De Bult crash to set a 1’34.133 for tenth.

Dani Pedrosa was out on the hard front, which means it’s probably not hard enough for Marquez and Crutchlow, and ended in 11th, just ahead of Hafizh Syahrin on the Monster Yamaha. Aleix Espargaro, Alvaro Bautista and Karel Abraham completed the top 15.