Audi is continuing its 16-year partnership with FC Bayern München with the return of the Audi Summer Tour. The itinerary includes three exhibition matches against some of the top teams in Europe. The tour begins with a brief stop in Klagenfurt. After that, the Munich-based team jets off to the United States on July 23.Paris Saint-German

With support from Audi, FC Bayern München will be taking part in the Audi Summer Tour end of July this year

The opening game will see the reigning German champions face the winners of the French league Paris Saint-German in Klagenfurt. Then on July 23, the German record league title winners will jet off to the USA. This will be the club’s third visit to the US as part of the Audi Summer Tour. The previous trips were in 2014 and 2016.

On July 25, the US leg of the tour will kick off with a match against the Italian record champions Juventus Turin in Philadelphia. The final game will mark a reunion with Bayern’s former manager Pep Guardiola. He will be leading out his new team Manchester City in Miami on July 28. These three top-class games are part of the “International Champions Cup” (ICC) exhibition competition. 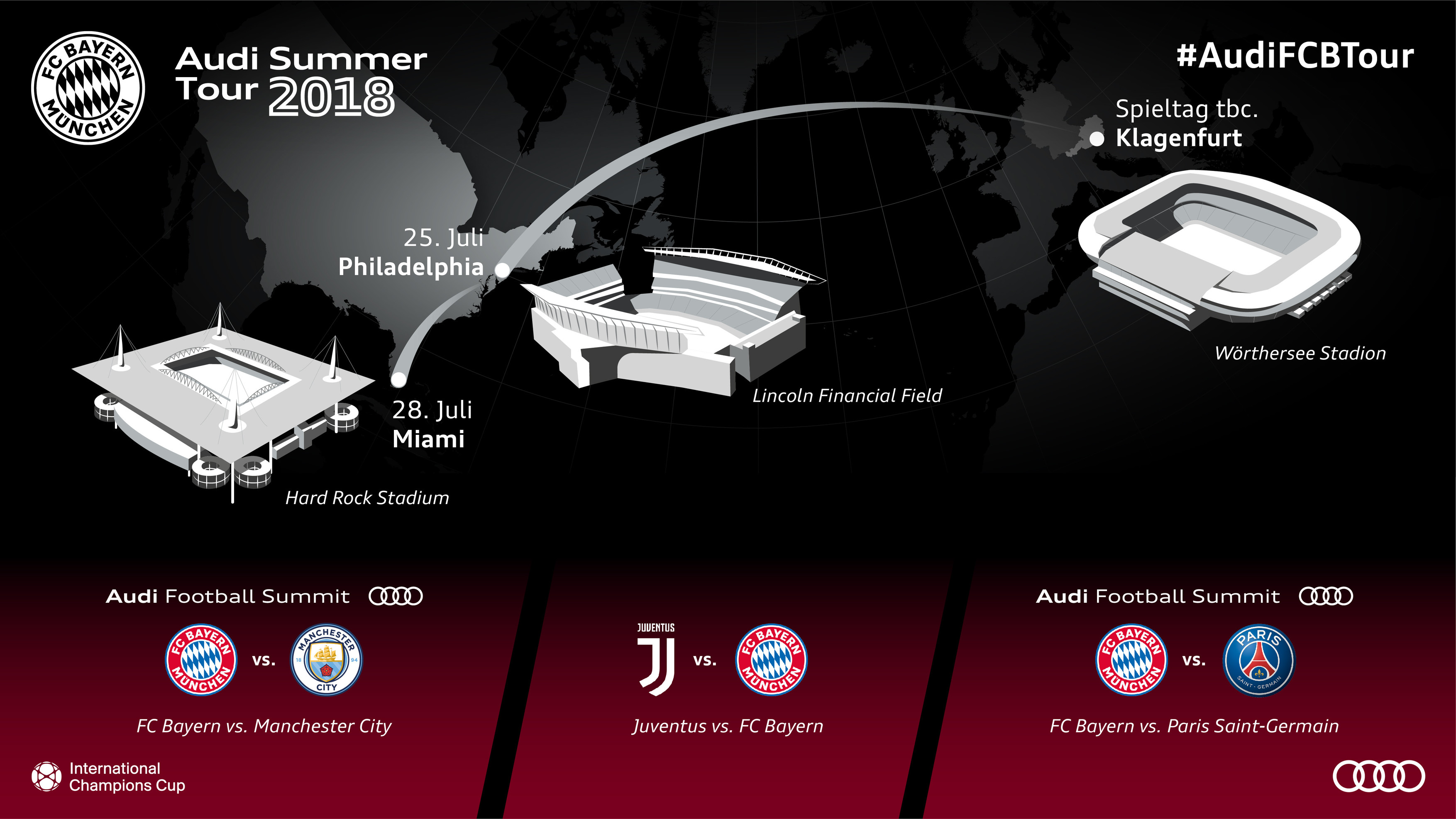 “As a long-standing partner of FC Bayern München, we are excited to be supporting the summer tour again in 2018,” says Bram Schot, Board Member for Sales and Marketing at Audi. “Our brand is all about premium experiences and unforgettable moments, and that is why the top-class games of the Audi Summer Tour are the perfect platform for our customers and supporters of FC Bayern. Added to that is the importance and potential of the US market for Audi.”

“The Audi Summer Tour is a key element of our international strategy and supports the global development of our brand. Together with Audi, we want to give our fans in the USA the opportunity to experience our team up close in their own backyard,” adds Jörg Wacker, Board member for Internationalisation and Strategy at Bayern München.

The tour will also include a large number of fan events away from the pitch, with club legends like Lothar Matthäus taking part

Audi has been a partner of the club since 2002, and in 2011 it became a strategic partner of FC Bayern München. Both players and officials get around in Audi vehicles. With more than 6,000 members, the “Audi Fanclub FC Bayern” is the football club’s largest fan club worldwide.

When the day is done and you have made it to the very top. #AudiA8 #BestoftheAlps pic.twitter.com/JD3DWWXZag

Neel Jani switching to the cockpit of a Formula E car