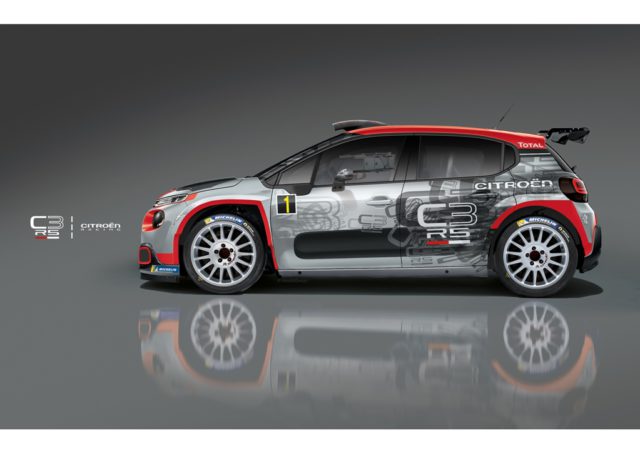 Citroen Racing has chosen the French round of the World Rally Championship for the maiden outing of the C3 R5. Works crew Stéphane Lefebvre and Gabin Moreau will drive the car at the first of a seven-round WRC2 programme. Yoann Bonato and Benjamin Boulloud will be in a customer version.

Citroen’s new flagship model will, at last, make its competitive debut next weekend at the Tour de Corse. The car will be looking to confirm its hopes of becoming the new benchmark in the category. It went through months of development work while covering some six thousand kilometres of testing since September 2017.

He will begin his challenge for the WRC2 title. He will also be contesting rallies in Portugal and Sardinia. With three seasons in the WRC behind the wheel of a four-wheel drive car under his belt, the talented young Frenchman has the experience, maturity and speed necessary to make a strong challenge.

The same goes for 2017 French Rally Champion Yoann Bonato. His private C3 R5 will be a part of the works team in Corsica in an attempt to pool assets and improve the car’s chances of securing a good result. Equally very involved in development, the Isère driver boasts experience from competing at the last two Tour de Corse. Although more than sixty percent of the stages are new this year, the iconic island rally – with its demanding, twisty and occasionally quick roads, and some speed tests as long as fifty-five kilometres – is the perfect event to show off the versatility, reliability and competitiveness of the C3 R5.

Finally, it is worth noting that a third C3 R5 will be running as one of the zero cars, driven by in-house test driver Alex Bengué

“After a long winter break, and a one-off appearance in France, I’m really looking forward to getting back on the WRC stages”, Lefebvre commented. “It’s always exciting to compete for the first time in a new car where you have worked on a large part of the development! The C3 R5 is definitely well designed. I feel confident behind the wheel and I can’t wait to get the opportunity to show it. I’m expecting it to be an almighty scrap at the front, but having done several days’ testing in Corsica, we are certainly well prepared. I have another day of testing scheduled before the start, plus the shakedown, in which to fine-tune the final details.”

“But having racked up many kilometres in development testing with the C3 R5 during the offseason, Stéphane and Gabin come into the rally in particularly good shape. I, therefore, have great faith in their ability to do the job they have been given, i.e. showcase our new flagship product, even if the Tour de Corse remains an iconic event that must be treated with respect, especially due to its very long stages”, Budar said.

Gasly: At the moment, I don’t know how many races I’m going to do...