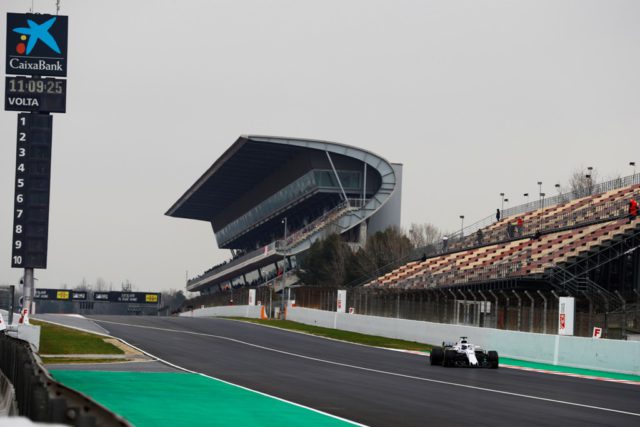 Williams Mercedes FW41 took to the track this week as pre-season testing for the 2018 F1 season got underway. This year’s car features several design changes. Some of them are due to regulation changes such as the introduction of the halo and the removal of the shark fin.

“It’s going to be an exciting year and a great opportunity for the team to get closer to the front, we believe”, commented Williams’ Chief Technical Officer, Paddy Lowe

“The FW41 is the product of some great teamwork across the various functions in the organisation, including aerodynamics, design, vehicle dynamics, race engineering, systems engineering and manufacturing. The car has many new features, most of which are not all that obvious. But externally the team has pursued a very different aerodynamic concept. It has allowed us some significant progress in aerodynamic performance. All Formula One cars are an evolution of what has gone before to some extent. But the FW41 does involve a number of departures from the directions that have been pursued in the past.”

“Overall, the philosophy we are starting to see emerge is a new approach to aerodynamic development coupled with a new approach to collaboration between aerodynamics and design to achieve the optimum working result. There is an obvious growth in devices around the bargeboard area. In common with our competitors, this area presented new opportunities in the 2017 regulations. And it has been considerably further developed for 2018. There are also a number of radical changes to the car’s packaging to incorporate further power unit developments from Mercedes HPP. We had an aggressive programme but this was a decision we made to ensure we have the quickest car we possibly can, ready for the start of the season and we are pushing everything to the limit.” 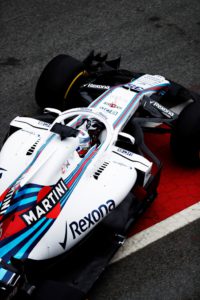 Dirk de Beer, Head of Aerodynamics at Williams, joined the team in February last year and has been pleased overall with the FW41’s progress

“Comparing the FW41 to the FW40, the biggest difference has been in the approach that we have adopted. [That is] in terms of the aerodynamic development and also the way the aerodynamic group has worked with the design office. We have taken a more aggressive approach, both in terms of being prepared to adopt features on the car which may lead to a loss of performance. But that we feel in the long term, is the right direction to go. And also being more aggressive in the way we believe we will operate the car. For example, in terms of how much fuel we’re running, how much cooling we have in the car.”

“The car is much less conservative than the FW40”

“We are pushing the car to the edge in a whole variety of areas. In terms of the aerodynamic approach, we’ve moved away from effectively developing the car with incremental changes from where it was previously. And we made some fundamental architectural changes. What has been nice is that those changes have delivered steps in the performance that we hoped they would. I’m very happy with the performance we’ve actually achieved for the car. Again, that’s measured in the wind tunnel. And hopefully, those results are borne out on the track. I expect our more aggressive approach will mean that there are certain areas where we are going to be a bit closer to the edge. We may have to do a few remedial actions but ultimately, I think the car is a better starting point.”

“Some big changes happened over the winter and during the early part of 2017. We had Paddy, Dirk and quite a few others come on board in that time. That involves a bit of coming together between people understanding each other, understanding where Williams’ strengths are. Where the weaknesses are. What the limitations in terms of resource and facilities are, against the backdrop of all the things you want to achieve technically. It’s both an interesting and a stretching environment when you’re doing both things simultaneously. I think the concept of the FW41 is a real synthesis of what we’ve done well. And what was good about the past, and where we need to go in the future.” 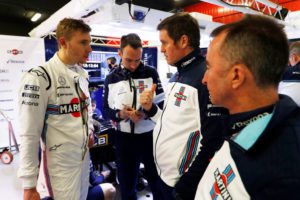 “When Paddy came here, he recognised that when we moved to the hybrid engines in 2014, the FW36 was a very strong car. He could see from afar that there were actually very strong characteristics about certain aspects of that car. Particularly around tyre management. And we’ve drifted away from that with successive cars until the FW40 last year. We did a lot of development work last year. It focused on trying to identify the strengths of the FW36 in comparison to the latter cars. And then, building on that knowledge.”

“We’ve been much more aggressive on the car. We’re opening up a lot of potential for aerodynamic development. So I’m hoping to see some good characteristics in terms of driveability, predictability, and the capability of the drivers to get a hold of a good consistent race car, with a very big uplift in overall aerodynamic potential. I think that’s what we should see come together in the way the car’s been approached.”

“The biggest challenge was the timeline. You have a new team of people coming together. That means new processes and understanding how to work together to establish. It has been a huge challenge for everyone at the coal face in design and manufacturing to produce the car from the time that we set the design direction. The underlying thing is whatever you do it’s the process of good engineering and trusting in the physics. That’s what we’re doing. Rather than coming in with a certain set of beliefs, Paddy has come in and his emphasis is much more on the engineering process and doing the engineering well. What you’re seeing is a product of it being an engineering-driven car and hopefully, its performance is reflected in that.”