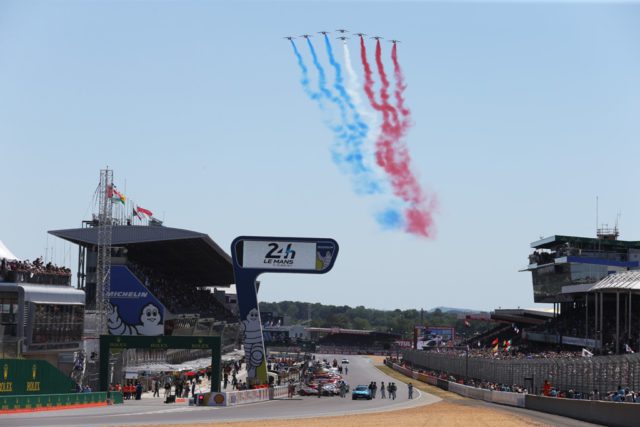 Every year the Le Mans 24-Hours circuit undergoes evolutions, further development and maintenance works. The aim of recent works was making the Porsche corners safer and improving the sanitation under the track. Now, 2018 will see a major innovation: the start line will move 145 metres further up the pits straight. This measure will be for all the events for cars and bikes on both the Bugatti circuit and the iconic 24 Hours of Le Mans layout.

2018 will see a major innovation at the Le Mans circuit: the start line will move 145 metres further up the pits straight

This means that the starter will wave the national flag over the car on pole position. That is 145 metres further up the track than before. This is a change which, at the moment of the flying start, will enable all the cars to line up on the pits straight a little while before the start thus avoiding the situation of having cars in the Ford chicanes when the pack finally goes.

For events with standing starts like the French Motorbike Grand Prix, this modification means that all the bikes will be displayed on the straight to the delight of the spectators in the grandstands opposite the pits.

But the finishing line’s position won’t change. Thus, to calculate the distance covered by the cars/bikes, people will have to do the following sum – subtract 145 metres from the number of laps covered multiplied by the length of the circuit in question.

All you need to know about the sporting regulations for each #class in the @24HoursofLeMans field ?#LeMans24 #WEC pic.twitter.com/oZ8i9W5uEA

Haas found a positive in the heart break from Australia – the competitiveness of...