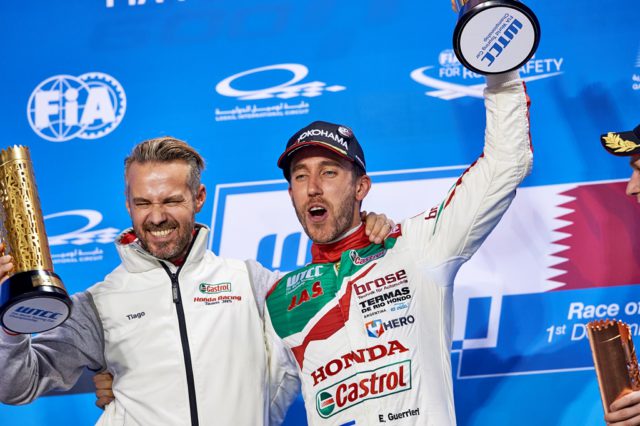 Having won for Honda in last season’s FIA World Touring Car Championship and achieved considerable success throughout their careers, Guerrieri and Monteiro will race the make’s Civic TCR in the inaugural 10-event WTCR season.

For Argentine Guerrieri, the announcement will enable the 33-year-old to continue showcasing his considerable talent in world touring car racing. For Monteiro, 41, the move marks the next stage of Portuguese driver’s return to action from serious injury. 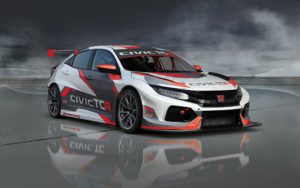 “This is two good bits of news in one. Not only is it confirmation of two very good drivers joining two very good teams for the first WTCR season, it’s also another important step for Tiago Monteiro as he continues his comeback to full fitness. Tiago was on course to win the World Touring Car Championship last season until his injuries forced him to miss the title run-in. It’s great he’s back on track after what was a very tough period. He’s preparing to challenge for the world crown that eluded him in 2017. We wish him well.”

“As for Esteban Guerrieri, he was impressive from the moment he first stepped into a world touring car in 2016. The victories he scored racing as a privateer for Campos Racing underlined his ability. He was the perfect choice to deputise for Tiago and didn’t let anybody down with his performances. There’s no question he deserves this chance and it’s important a driver from South America will be taking part in WTCR 2018.”

“I’m delighted to remain part of the Honda Racing family for another year. Since I first worked with Honda in 2012, I feel we’ve been getting stronger and stronger by the season and by last year we were in a very good place to win the championship before my accident. The past six months have been incredibly tough, but thanks to some amazing support I’m now well on my way to getting back in a racing car. Boutsen Ginion Racing are a strong team, who I’ve won races with in TCR before, so I can’t wait to drive the car and for the season to start.”

What a pleasure to see so many friends at #retromobile again this year ! Thank you #hondafrance… https://t.co/li2Xtqxl76

“I felt like last year was a real breakthrough year for me in world touring cars, so I’m extremely pleased to be racing a Honda Civic in 2018. TCR is the fastest-growing touring car category in the world and I’m incredibly excited to be a part of this programme. I had some great races against the ALL-INKL.COM Münnich cars in the WTCC last year and it’s clear they can run a very fast machine, so I’m optimistic of putting together a title challenge.”

“We are delighted that ALL-INKL.COM Münnich Motorsport and Boutsen Ginion Racing have chosen Honda and the Civic TCR for the FIA World Touring Car Cup. We are also honoured to continue the relationships with two of the world’s best touring car drivers within the Honda Racing family and trust that JAS Motorsport will provide a state-of-the-art racing car that will challenge for victories regularly. With the Civic TCR, we wish for brilliant success from both teams and drivers in the WTCR.”

“We are pleased that the Honda Civic TCR, built at our Milan headquarters, will contest the FIA World Touring Car Cup with teams with such strong records as ALL-INKL.COM Münnich Motorsport and Boutsen Ginion Racing. Since it first turned a wheel last October, the Civic has undergone more than 3000 kilometres of testing. It tackled a 24-hour race on its competitive debut and has proven to be an improvement in all areas over the previous model, which delivered 12 championship titles in 2017. We look forward to the challenge ahead.”

Vettel fastest in FP3, Ferrari and Mercedes in 0.1 sec

Neuville: All we can do is give it our maximum, fight and aim for...