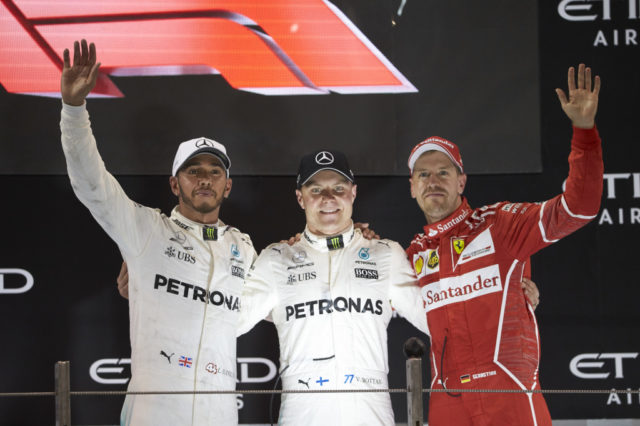 Valtteri Bottas claimed his third career victory and his first race win at the Yas Marina Circuit, while Lewis Hamilton finished the Abu Dhabi Grand Prix in second position. That was the 40th 1-2 victory for the Mercedes-Benz Silver Arrows in Formula One and fourth 1-2 of the 2017 season.

“There was a lot of pressure from Lewis from behind throughout the entire race. I knew that one proper mistake could have ruined it. I had to keep my head down and go lap by lap. I couldn’t be happier to end the season like this. Of course, it would have been nice to get the second place in the championship, but Sebastian [Vettel] had a good weekend as well.”

“Looking at the overall season, I need to perform better; but I’m very pleased with how the end of the season has been going for me. I’m really happy to be part of the team that won the constructors’ championship. Mercedes has given me the opportunity to win a few races and claim a few pole positions, so I’m a really proud team member. However, I was hoping for an overall better result in the drivers’ point. I’ve learned a lot this season, so now I’m really looking forward to next year. This weekend shows that I can perform, I can be on pole and win races. So now I need to try and do it more often next year.”

It’s not easy having @LewisHamilton in your mirrors ?#AbuDhabiGP ?? pic.twitter.com/EFnrhinldR

“A great race, a great battle at the end of the season. I did the best I could, but Valtteri did a great job – very clean and no mistakes. This is one of the harder tracks to overtake; you need to be 1.4 seconds faster than the car in front to overtake. I had a lot of pace in the second stint, but as soon as I got into that window of about 1.2 seconds, I was done. But it was neat that you could push all the way on the tyre, it didn’t seem to drop off that much.”

“It’s really great for Valtteri to have this win, this is a real boost for him to go into the winter with. Now I’m looking forward to some time to sit down with my family and just reminisce about the whole year. It’s been such a strong year, the team have been phenomenal all year long. I’m so grateful for everyone’s hard work back at the factory and for all the support from Mercedes.”

Volkswagen launches ELECTRIC FOR ALL campaign

Vaillante Rebellion #13 disqualified from the 24 Hours of Le Mans