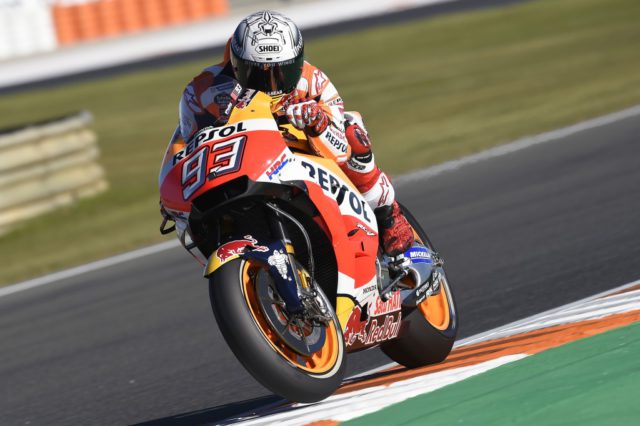 Marc Márquez claimed pole position, his eighth of the year, for the title-deciding MotoGP race at Valencia, despite crashing during his second Q2 run.

Márquez went quickest early on before storming to a 1:29.897 on his second lap at the Ricardo Tormo Circuit. He remained unbeaten across the remainder of the 15-minute session.

Márquez tried to beat his own benchmark on his second run but crashed through Turn 4, though was able to walk away uninjured, having restrained himself against kicking his stricken bike in the gravel trap.

Title rival Andrea Dovizioso, who must win Sunday’s race to stand a chance of taking the title, was only ninth fastest.

Johann Zarco emerged as Márquez’s primary opponent as he finished 0.349s behind the Repsol Honda rider, while Andrea Iannone delivered on his FP1 pace to claim third.

Jorge Lorenzo was Márquez’s closest challenger early on but crashed heavily on the entry to Turn 14; he returned to action on his spare bike but was unable to improve.

Dani Pedrosa took fifth for Repsol Honda, in front of Ducati tester Michele Pirro and Valentino Rossi. Aleix Espargaró clocked the eighth-best time for Aprilia. He suffered an off at the final corner, bringing his session to an early end.

Suzuki’s Álex Rins finished just 0.011s down on Dovizioso as he rounded out the top 10. KTM Pol Espargaró, who must start from the pits due to exceeding his engine allocation, in 11th spot.

Jack Miller finished at the foot of the times in Q2, having been another to crash out in the session. Maverick Viñales dismal weekend continued as his poor practice pace meant he was forced into Q1.

Viñales was unable to match the laps recorded by the Espargaró brothers. He did not qualify for Q2, leaving him in 13th place on the grid. He punched his bike in frustration after completing his lap.