Roborace’s Robocar became the first ever driverless race car to complete the Hillclimb at the Goodwood Festival of Speed.

Visitors to Goodwood over the weekend will also get the chance to see the feat first-hand again, as Robocar will be attempting the Hillclimb once each day on Saturday and Sunday of the event.

The electric race car wowed the crowds as it took to the Hillclimb, using a variety of sensors. They are located around the vehicle to give it a 360-degree vision of its environment. The information from these sensors gives Robocar the ability to localize its position on the hill. It also detects drivable surfaces and objects using deep neural networks. The race car’s speed was limited to 120kph to allow visitors to get a good look at the car on its way up the Hill.

“We are ecstatic that the team have been able to achieve this landmark run and we hope that it draws attention to the amazing advances that are being made in the automotive industry,” said Rod Chong, Deputy CEO of Roborace. “Robocar is an ambassador for the future technologies we will see on our roads and we hope that inspirational stunts like this will change public perceptions of autonomous vehicles.”

“It is an enormous achievement for a race car to complete the very first run of the hill using only artificial intelligence,” said Charles Gordon-Lennox, the Duke of Richmond and Founder of the Festival of Speed. “Roborace has worked incredibly hard in order to pull this off and we are excited for the public to see them in action over the Festival weekend.” 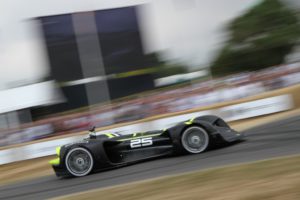 That is an exciting technology showcase located in a pavilion on the Goodwood law. Inside the exhibition, Roborace is offering visitors the chance to try out a fully immersive VR simulator.

In its second year, the FoS Future Lab is bigger and even more exciting than its debut appearance in 2017. This year’s exhibition focusses on innovation topics like space exploration, autonomous transport, robotics and personal flight. Visitors will be able to view displays and demonstrations as well as interact with some of the technology. The will also have the opportunity to learn more about the new and future technology.

The automotive futurist is famous for his work in Hollywood films such as Oblivion and Tron: Legacy.

The vehicle weighs 1,350 kg. Its power comes from four 135kW electric motors. Each of them drives a wheel while the total power is 500-plus hp. An NVIDIA DRIVE PX2 computer processes Robocar’s data, which includes inputs from the LiDar, radar, GPS, ultrasonic, and camera sensors.

Roborace provides the car with an API as a platform for teams. After that, they add their AI driver algorithm to the vehicle. Development of the automated driving system for the Robocar at Goodwood was led by ARRIVAL, the automotive technology company.

Suninen can’t wait to get started