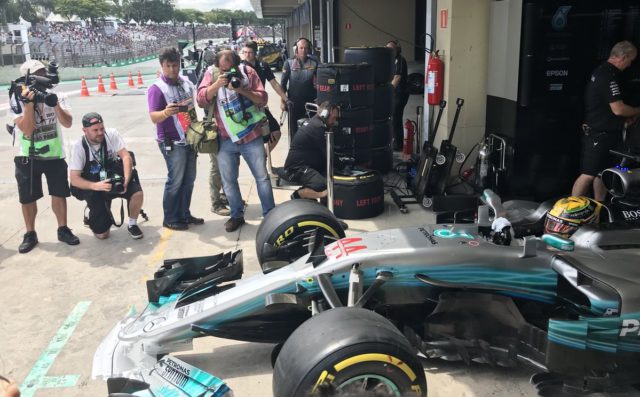 Lewis Hamilton remained at the top of the times during Friday’s second practice session for the Brazilian Grand Prix, ahead of team-mate Valtteri Bottas, as Mercedes continued to lead Red Bull and Ferrari.

Although neither Hamilton nor Bottas improved on their lap times from first practice, amid hotter temperatures, they were still quick enough to form another 1-2.

Hamilton clocked a 1:09.515 on the Super Soft tyre, putting him half a tenth clear of Bottas, with their nearest rivals again lapping in the 1m09.7s and 1m09.8s.

Daniel Ricciardo, braced for a 10-place grid penalty, due to further power unit changes, finished as Mercedes’ nearest challenger, some two-tenths back.

Sebastian Vettel put his Ferrari between the Red Bulls of Ricciardo and Max Verstappen, though team-mate Kimi Räikkönen was cut adrift in sixth, having complained of vibrations.

Fernando Alonso rounded out the top 10 for McLaren-Honda, despite Honda power unit trouble. It prompted an angry reaction on his return to the pits.

Carlos Sainz Jr. and Sergio Pérez followed in the other Renault and Force India machines. The latter returning to action after George Russell’s practice debut.

Toro Rosso recovered from FP1 engine issues to get Pierre Gasly (16th) and Brendon Hartley (17th) back on track.

However, they will also be penalised for power unit changes this weekend. Hartley set to drop 10 places on the grid, and Gasly penalty now up to 25 places.

Sauber drivers Pascal Wehrlein and Marcus Ericsson wound up 18th and 19th. Ericsson compromised by an off track moment at Mergulho, which included a brush with the wall.

Toyota #8 first at the 6 Hours of Spa, Alonso debuts in WEC with...

Ricciardo: I’ve had four podiums and three second in Singapore, it’s about time I...