Citroen managed to take the seventh place in the Dayinsure Wales Rally GB with Kris Meeke. And while that was not the desired result, the team took heart from the performance level shown by the C3 WRC throughout the weekend.

Meeke was third overall by midday on Friday but fell to sixth until the end of the day. On Saturday he missed a chicane, stalled and lost about ten seconds. During the last day of the rally Meeke was patient, gradually picked up his pace and was second fastest in the power stage.

During the first day, Craig Breen had a slow puncture, after that fell in a ditch full of water. He returned to the stages on Saturday under the Rally 2 rules but then there were problems with his handbrake. Breen had to wait until after service, scheduled at the end of the afternoon, in order to be able to use this vital tool for negotiating tight corners and hairpins. On Sunday he set three top-six times during the morning and climbed from 36th to 15th place. Driven by Khalid Al Qassimi, the third car entered by Citroën Total Abu Dhabi WRT at this rally also made it to the end. On his return to this type of surface, the Emirati driver finished in 22nd place. 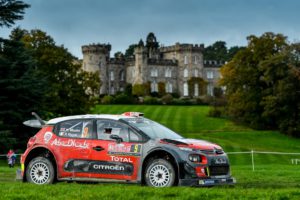 What can you say about this rally?

“First and foremost, I would like to congratulate Sébastien Ogier, Julien Ingrassia, Malcolm Wilson and his M-Sport team on winning their World Championship titles. They have had an intelligent season, managing to combine performance and consistency. It is this consistency that has meant that they have won the titles with one round to go. As regards the rally itself, we felt that it would be difficult to compete with Elfyn Evans, who had a tyre set-up particularly well suited to this surface and these conditions. That proved to be the case, but the performance of Elfyn was nonetheless remarkable.”

And what about the Citroen crews?

“We knew that the starting positions of Kris Meeke and Craig Breen for the first leg could be a handicap. In the first few stages, however, our drivers were on the pace: Kris got among the leaders and Craig might have done the same had he not picked up a slow puncture on Friday morning.”

“Saturday’s leg proved decisive. Due to a number of minor reasons, Kris lost time but he was never that far away from second place. On Sunday, he proved once again – as did Craig – that we have made substantial progress on this type of surface. Aside from Kris’ final result of seventh place, I’m mostly pleased by the feeling that our drivers had in the car. They both said that had really enjoyed being in the C3 WRC this weekend and that it was efficient, fast and pleasant to drive. This is further rewards for all the work done before the summer.” 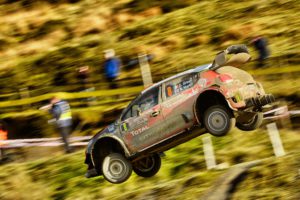 You held your pre-event test in the south of France. Wouldn’t it have been preferable to test in the UK?

“For the last few months, the work done in testing has been mainly designed to prepare for the 2018 season, with the aim of widening the operating window of the C3 WRC. At the same time, we have to work within certain budget restrictions and the cost of repairing British roads is particularly high. We, therefore, chose roads that had certain similarities with those in Wales and the feedback from this session was useful for our drivers this weekend.”

Sébastien Loeb spent a lot of time in the service park this weekend… Will we see him contest a rally in the near future?

“Well, in any event, it was certainly a first to see him working as a television pundit in Wales! It was nice for the entire team to see Seb again and we spent some time talking about what we might do together in 2018. It’s still a bit early to say more than that, but I think both sides would like to do something!”

There is now only one round left this season… What are your targets for Australia?

“Before Spain, we said that we wanted to win one rally and get one podium in 2017. We achieved the target of winning a rally, but I think our drivers will have a good chance of winning again in Australia. Kris Meeke, Craig Breen and Stéphane Lefebvre will form our driver line-up in Australia and they will have excellent starting positions on the opening leg. We can be ambitious for this final round, before switching our focus entirely to 2018.”

Evans a little disappointed for missing second place in Mexico