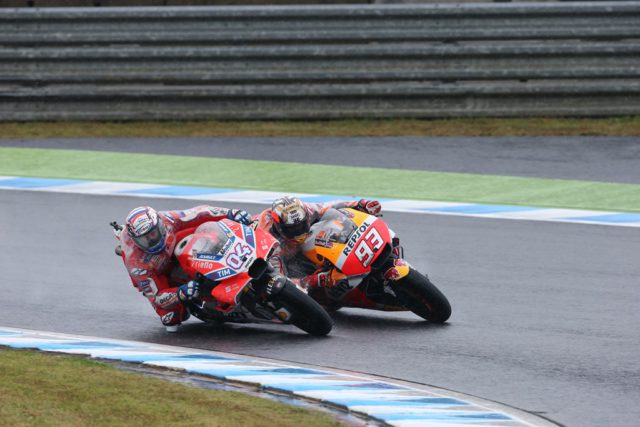 Andrea Dovizioso took a wonderful victory at the Motegi circuit in Japan. The Ducati driver passed Marc Marquez in the last turn of the last lap. His teammate Jorge Lorenzo finished sixth in the race. 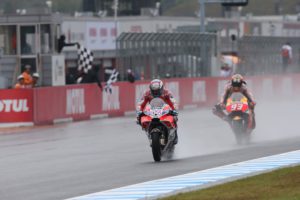 “It was a difficult race because at the start there wasn’t much grip and I didn’t have a good feeling with the bike but I never gave up, not even when I was losing ground, and this made all the difference. Marc was really quick and he tried right until the end. But there were some places where I could attack. And he also made a small mistake on the last lap which gave me a chance to catch him again and try and pass him at Turn 11. I knew that he was going to attack me in the final two corners. But I was prepared for this, I closed the door on him and he had to go a bit wide to pass me. It was absolutely vital to win [at Motegi] and I’m really so pleased for the whole team and for the championship.” 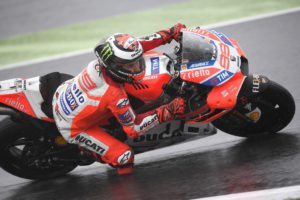 “I can’t be happy with my race because we had the potential to try and win if there hadn’t been so much water on the track. We weren’t able to find the right setting to be quick in these conditions and without rear grip, it was impossible for me to do anything more. I gradually succeeded in getting a better feeling with the bike, and I improved my pace and was able to pass [Maverick] Viñales, [Johann] Zarco and Aleix Espargaro. In the end, we were missing almost a second per lap, and that’s a pity because this weekend we were always fast. I want to congratulate Andrea, because he’s proving to be a really strong rider, mentally as well, and he is able to take advantage of every chance of fighting for the world title. Hats off, and congratulations to him and all the team!”

“There was so much tension but in the end also so much satisfaction! Andrea was awesome, he did a truly perfect race, and in so doing reduced the gap from Marquez to eleven points. His fifth win of the season has a special significance and I’m really happy. Pity about Jorge, who wasn’t able to get the result in a weekend in which he had always been competitive. Now we are thinking about Phillip Island, and we know that it will be a tough battle until the very end but we have all the right cards to fight for the title right down to the wire.”

Neuville: Our goal for Poland was to outscore Ogier and we did it