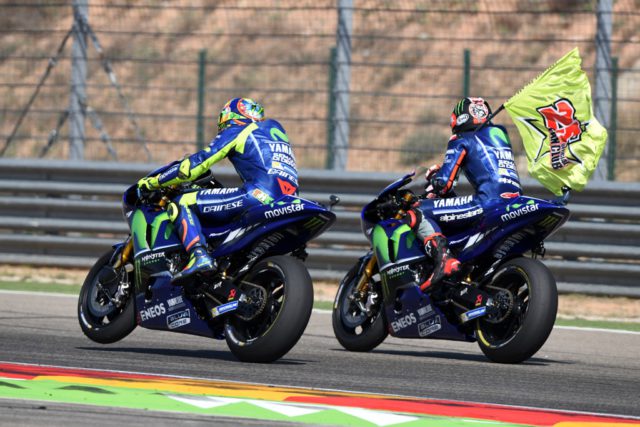 Movistar Yamaha MotoGP’s Maverick Viñales and Valentino Rossi are on route to the Twin Ring Motegi track to commence the Motul Grand Prix of Japan.

A fortnight ago, Viñales secured fourth place in Aragón

He currently holds the third position in the championship standings and arrives in Japan ready for action at Yamaha’s home race.

Since the Spaniard began his Grand Prix racing career in 2011, he has visited the Motegi podium four times, securing two second places at the Japanese Grand Prix in Moto3 (2012 and 2013), a second place in Moto2 (2014) and a third place in the MotoGP class last year. This year he hopes to climb the top step of the rostrum to add 25 points his tally and close the 28-point gap to first place in the championship standings.

“The next Grand Prix, held in Japan, is very special for me since it’s one of my favourites of the season and it’s also the home race of Yamaha. I hope to do a good job and be able to collect more points for the championship, which is crucial to continue fighting for the title”, Viñales said.

For the next races, we have to try to work even more than usual. We have to keep fighting and working with high motivation, even though it will not be easy to complete the last part of the season and bridge the gap between the championship leader and me. I will try to work even harder and I arrive in Japan with the aim to learn and be even stronger. I’m convinced that, with the support of the amazing fans at the Motegi circuit, we will be able to give our 100%.”

Teammate Rossi made a stunning comeback at the race weekend in Aragón, securing a brilliant fifth place, just 24 days after sustaining a leg injury

The nine-time World Champion used the last two weeks to further rehabilitate his right leg and expects he will be able to ride with more ease this weekend.

“After my return to MotoGP in Aragón, the work and my recovery have continued. It was good to have two more weeks after the last race to work on my rehabilitation because now we will have three races in a row and it will be important to be in a good physical condition. I did everything possible to get pretty fit for the round at the Motegi track because this is always a very important GP for Yamaha. I like this circuit very much and I’m glad to be here. We will do everything we can to get the best result possible”, Valentino explained.

It became a part of the MotoGP calendar in 2000 as the Pacific Grand Prix until it replaced the Suzuka Circuit as the host of the Japanese Grand Prix in 2004. The 4.8 km-long Motegi track has six left and eight right corners and is one of the most popular events on the calendar. Race fans particularly enjoy its stop-start character, tight hairpins and slight elevation changes, as they always result in a weekend full of action.