Kris Meeke had a particularly difficult 2017 WRC season with only one victory – in Mexico – and a pile of problems. The Northern Irishman even missed a race (rally Poland), while Citroen called Sebastien Loeb to test the C3 WRC in an attempt to turn the whole team’s fortune.

It seems the latest work has given fruits as in Rally de España Meeke was once again confident. He has always been quick – there is no doubt about that. But more than once speed cost him than led him to success. This time Meeke was both quick and careful and the result was his second win of the season.

Today the Citroen driver shared his thoughts on that success.

“I know you all must think it was a heavy party night after our win in Catalunya but in fact, there were a lot of press and PR commitments, and a really nice team dinner, and then I drove back home really late at night. I’ve needed a ride on my bike this morning just to get properly woken up!”, Meeke wrote on his Facebook page. 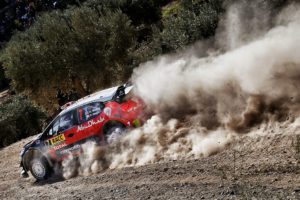 Despite not having an ideal run then, he managed to stay close to the lead, finishing the first day of competition in third place. And he was only 3 seconds behind the Friday leader Andreas Mikkelsen.

“We made not the perfect tyre choice in the morning because we went too soft on the package and we got caught out towards the end of the final stage of that loop. The tyres overheated and delaminated. That cost us 10 to 15 seconds. Then I had a spin on the first stage after service and we lost another five seconds or so”, Meeke explained.

He had not done any asphalt testing in Spain. Thus the Citroen driver was really careful the next morning: “I was telling myself, ‘I’m not going to be caught cold on this surface, against these guys who’ve done their testing on Spanish tarmac. I’m going to hit the ground running.’ And fortunately for me, that turned the tide. We were able to catch a few of the other guys on the hop and pull out an advantage.”

From then on, the car just gave me so much confidence. It was a pleasure to drive. You’ll have seen that on the Sunday; I was driving open and freely, and it was a really nice experience to be able to drive with a smile on my face again.”

After the finish, Meeke remembered walking on those same Spanish roads 20 years ago to watch Colin McRae in the Subaru. That was the time when he never imagined he would even drive a World Rally Championship car.

Meeke also repeated he is delighted for everyone in the team

“It’s a timely boost for everyone after a very difficult period. We always knew the C3 was fast. And we’ve shown it.”

“We have to take care, though, because this doesn’t change the world in terms of the wider, overall championship. We still need to work in certain areas. But a victory always helps, and it gives everyone in the Citroen Racing team a boost going into Rally GB.”

Lorenzo: Winning after a close battle with Marquez has a really special taste

Szafnauer: Racing Point needs to establish its position as a podium contender