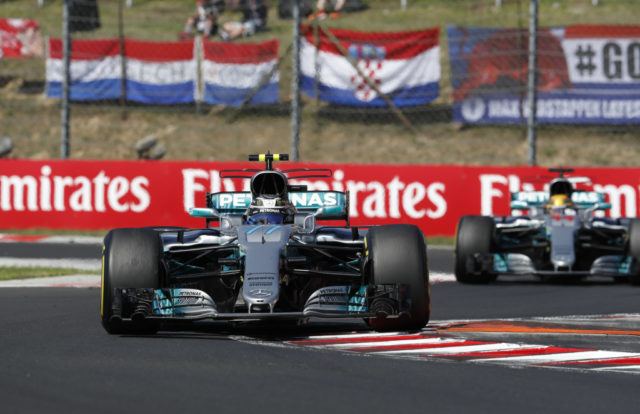 Lewis Hamilton moved over in the last stages of the Hungarian Grand prix and let his teammate Valtteri Bottas back in third place. The English Mercedes driver said later that was the right thing to do.

“I tried my best out there. It’s tough when you push so hard and you work so hard and you end up in the same place that you started. When the radio didn’t work, I was thinking that the team was worried about the tyres not going the distance. So maybe they were going slow so that they could speed up later. I was pushing and I had all this pace, but I was stuck behind Valtteri and I couldn’t tell the team because of the radio. But in the final laps, I kept my word. I said that if I couldn’t pass Kimi then I would let Valtteri back”, Hamilton explained.

“I have said through this year that I want to win this title in the right way. And perhaps I will look at it in a different way if, at the end of the season, I lose out by a small margin. But I believe in doing the right thing and that when you put good things out there, they come back to you. I was 20 points behind before, but down to one, and now back to 14. We have lost quite a few points in the first half of the year – but I know that we can win it, once we come back even better after the summer break.”

Hamilton: “I believe in doing the right thing and that when you put good things out there, they come back to you”

Valtteri Bottas said it was a tricky race for him – not the pace but the handling when moving close to another car.

“Once you get within 1.5 seconds to the car in front of you it becomes so difficult to close the gap. And that track position was a big benefit for Ferrari today. Even though Sebastian [Vettel] was struggling, no-one could pass him. We tried as a team to swap positions, but Lewis couldn’t get past them either. We didn’t gain any points but I’m glad we tried it.”

“I was promised that Lewis would let me back if it didn’t work out. I was struggling with the back markers so the gap to Lewis became bigger than I wanted. But Lewis and the team kept their promise and we swapped positions back in the last lap. I don’t think every teammate would do that in a championship fight. So I think that was really nice of him and it shows that he is a real team player. Our situations still are not too bad with regards to the points and the championship standing. Lewis and I are still in the fight.”

Kimi: Second is not ideal, but we take it; Vettel: It could have been...