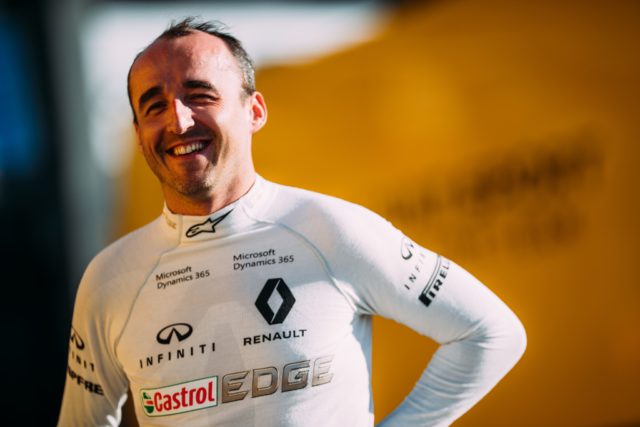 Only days after Renault Sport’s Managing Director Cyril Abiteboul declined to comment if Robert Kubica would take part in the test after the Hungarian grand prix, the possibility got the F1 world buzzing.

At Silverstone, Abiteboul explained in a bit more detail what Kubica’s program was until now.

“Well, that’s a second test after obviously a first test”, he said. “The first test was nothing more than an opportunity for him to get back behind the steering wheel into a Formula One car – but there is a big caveat, is that it’s a Formula One car from 2012 with demo tyres, with V8 engine, normally-aspirated, fantastic noise but doesn’t exactly match the current F1 car. So, whatever we do is not quite representative.”

“That second test, however, we sort-of walked more towards what could look like a plan in order to assess. To give both him and us the opportunity to assess a little bit more his limitation and his abilities.”

“What I can tell you is that he is still quick, he is still very consistent and, more importantly, he still has this energy, this drive, this sort of enthusiasm that he has always had, he always carried to him and to the team. Really too early to talk about next steps. I don’t want to add to the speculation. Right now the focus is on, you know, getting the most out of the overall lineup and package that we have and then we’ll be thinking about 2018 in due course – which is not just now.“

Abiteboul also did not what to say what were the results of the evaluation. But he still added the team did not see “any obvious roadblocks”.

Only days after Renault Sport’s Managing Director Cyril Abiteboul declined to comment if Robert Kubica would take part in the test after the Hungarian grand prix, the possibility got the F1 world buzzing

An F1 test during the season would be a perfect opportunity for Robert Kubica to test a 2017 car. Now there is talk that Renault is evaluating the possibility to let the Polish driver participate in the one in Hungary. If this happens, there will be even more rumours about a possible Kubica return to Formula 1.

Marc Marquez on pole in Austria

Pedrosa fastest on day one at Brno