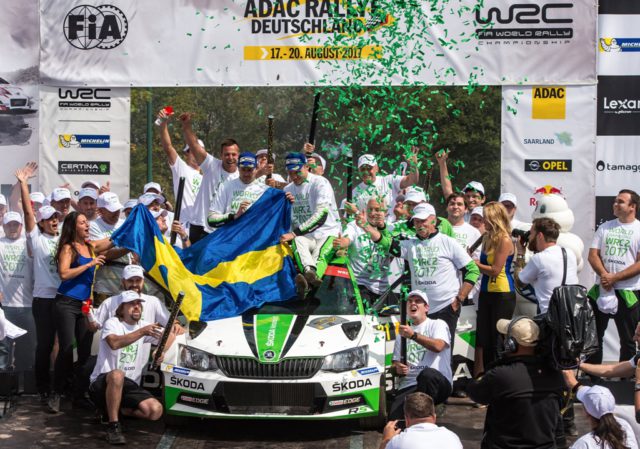 Pontus Tidemand/Jonas Andersson won the 2017 WRC2 title after taking victory in the category in ADAC Rallye Deutschland. The Skoda crew managed to take the crown three rounds before the end of the season. The result was even better – the team took the constructors’ title thanks to Jan Kopecký/Pavel Dresler’s second place.

After twisty vineyard stages on a rainy Friday followed by sun-baked concrete tracks on the infamous military area of Baumholder, the last day of ADAC Rallye Deutschland offered mixed conditions on four very fast stages in the Saarland area close to Lake Bostal.

With a fast and controlled drive Kopecký and Dresler secured their overnight second place in WRC 2 category. A possible win slipped through their fingers during the second rally day when they suffered a puncture on the 42 kilometres long “Panzerplatte” stage on Baumholder.

“That’s rallying. From there on we concentrated on bringing home the second place and used the rally as a kind of extra training for the Barum Rally,” said the reigning Czech Rally Champion. 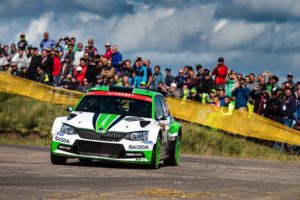 “After a puncture on Saturday we were literally in the middle of nowhere. On the last day, it was all about bringing the car to the finish in one piece in order to win the drivers’ title and give the team the reward it deserves,” commented the Swedish Skoda driver. After four wins (Sweden, Mexico, Argentina and Portugal) and a second place at Rally Poland, a third place at ADAC Rallye Deutschland was enough for Pontus Tidemand/Jonas Andersson to secure the World Rally Championship (WRC 2).

Some days just call for a bigger celebration than others! ???? pic.twitter.com/HxMBy0hpkr

On the podium at Lake Bostal Skoda Motorsport boss Michal Hrabánek could celebrate not only the drivers’ title but as well the win of the Team Championship in WRC 2.

“I am proud and happy for the whole team. Pontus and Jonas really deserve the title. And our Skoda Fabia R5 proved as well that it is the best rally car in its category.”

“I am proud and happy for the whole team. Pontus and Jonas really deserve the title. And our Skoda Fabia R5 proved as well that it is the best rally car in its category.” 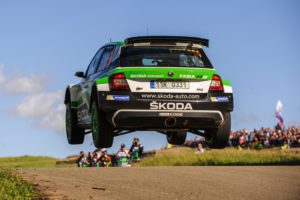 During the next weekend, Kopecký and Pavel Dresler secured their sixth consecutive win of the 2017 ERC season

They not only defeated their regular competitors inside the Czech Rally Championship.

“Barum Rally is clearly the most demanding event of the Czech Championship and one of the best European rallies. I am proud and happy that I managed to win it for the seventh time. Thanks to my co-driver Pavel and the whole Skoda team, all the engineers and mechanics for providing me with the quickest and most reliable car. My Fabia R5 was simply perfect”, emphasized Kopecký.

? With the 7th #win at the #BarumRally ??, Jan #Kopecký breaks his own record and remains unbeaten in Czech c’ship since April 2015 ?? pic.twitter.com/uMR9LlTJmk

Sainz: Austria is definitely one of the cooler places to go racing

Hulkenberg: In Brazil it’s all about confidence, especially the in-field middle sector

The legendary Peugeot 208T16 Pikes Peak has a new owner