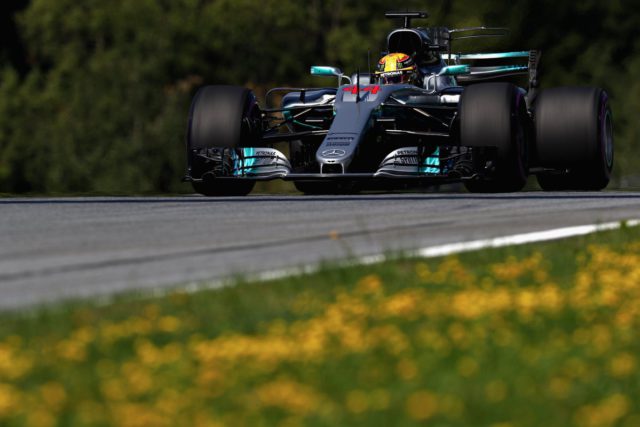 Lewis Hamilton remained at the top of the timesheets during Friday’s second practice session for the Austrian Grand Prix, narrowly ahead of Ferrari rival and title leader Sebastian Vettel. Hamilton posted the fastest ever lap around the Red Bull Ring in FP1. In FP2 he lowered the benchmark by almost half a second in the afternoon.

Hamilton’s best time of 1:05.483 put him 0.147s up on Vettel, as drivers used the Ultra Soft tyre. It was not an entirely smooth session for Hamilton. The mechanics carried out a spark plug change, after which he reported power issues.

Valtteri Bottas had a scare in the other Mercedes, when he slid through the Turn 6 gravel trap and only just avoided the barriers, but recovered to third. Max Verstappen and Daniel Ricciardo took fourth and fifth.

Kimi Räikkönen was unable to break the 1m06s barrier in sixth, some half a second down on team-mate Vettel. He was a chunk clear of the chasing pack, led by Kevin Magnussen.

McLaren, having put both cars in the top 10 in FP1, was given a further boost by Fernando Alonso’s run to eighth in FP1, despite a incident late on. Alonso and team-mate Stoffel Vandoorne, both running Honda’s new, ‘Spec 3’ power unit, took eighth and 12th respectively, separated by just over a tenth.

Kvyat returned to the pits in the closing stages with overheating brakes, which caught fire when he stopped. While Sainz Jr. missed half an hour of running wide at Turn 9. Sainz Jr. damaged his car when he attempted to rejoin the track.

Williams pair Felipe Massa and Lance Stroll complained of balance woes en route to 14th and 16th. Followed by the other Force India of Sergio Pérez, who went off at Turn 4. Jolyon Palmer was restricted to just seven laps, amid further technical trouble, leaving him 18th, as the only driver without a time on the Ultra Soft rubber.