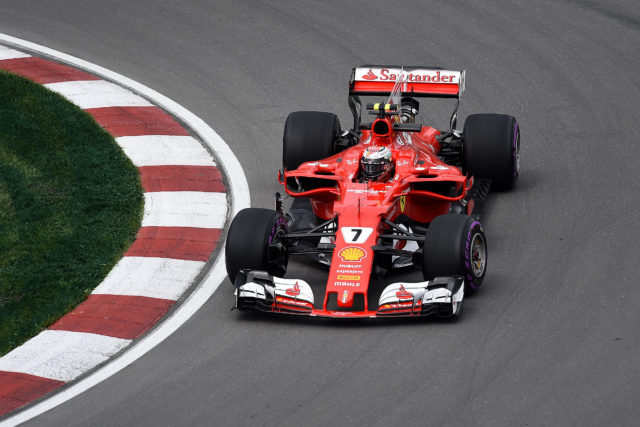 Kimi Raikkonen set the fastest time on Friday for the Canadian Grand Prix. The Ferrari drivers topped the second practice session. He was the only one to get into the 1m12s bracket. He set a time of 1:12.935 on the Ultra Soft tyre. The Finn was almost a second quicker than Lewis Hamilton time from FP1.

Hamilton ended FP2 second, two-tenths back. Sebastian Vettel traded fastest times with team-mate Räikkönen in the early stages. But he slipped back to third, half a tenth away from Hamilton, surviving a late spin.

Valtteri Bottas wound up fourth, a tenth further back. He also spun during his race simulation.Max Verstappen put Red Bull 4th.Both of the Red Bulls hit technical trouble., Daniel Ricciardo being stuck in the garage with a suspected engine issue. Verstappen stopped amid gearbox concerns.

As usual, there was a sizeable gap back to the rest of the pack. Williams driver Felipe Massa just was over a second off Raikkonen time in sixth position. Fernando Alonso lost an hour of running after his FP1 stoppage. He managed to get some representative running in and rose to seventh with a last-gasp run.

Force India drivers Esteban Ocon and Sergio Pérez remained in the top 10, finishing 8th and 10th. Romain Grosjean topped the spinning charts, as he lost control of his Haas VF-17 on three occasions, but still managed to set 11th place.

Renault driver Nico Hülkenberg rose up the order to 12th. He was just ahead of Carlos Sainz Jr. (Toro Rosso), who bounced back from his FP1 stoppage.Kevin Magnussen put his Haas 14th, in front of the aforementioned Ricciardo and Jolyon Palmer as again he was half a second down on team-mate Hülkenberg.

Williams rookie Lance Stroll lapped on Super Softs throughout the session, as he focused on longer runs, with Sauber pair Marcus Ericsson and Pascal Wehrlein surrounding Stoffel Vandoorne. Vandoorne’s best lap time, however, came on the hardest compound available (Soft) as he spun at the final chicane after switching to the Ultra Soft tyre.

Ericsson, meanwhile, was involved in two incidents; Mercedes reported him to Race Director Charlie Whiting, for allegedly blocking Hamilton, before he tapped the Wall of Champions.

PROVISIONAL CLASSIFICATION (END OF #FP2)@ScuderiaFerrari fight back to edge @MercedesAMGF1

Austin is one of my favourite Formula 1 circuits. It has personality and charisma,...

Palmer: Monza is all about finding a good top speed, with the optimum downforce...

Alonso: There’s huge anticipation from everyone to perform well in Abu Dhabi