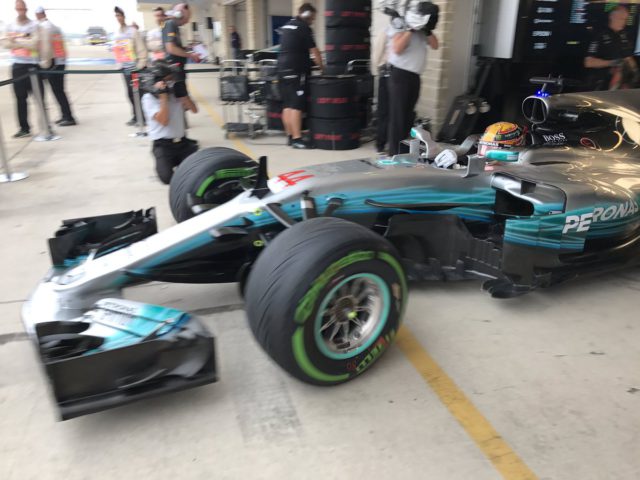 Lewis Hamilton set the quickest time during the opening session at a drizzly Circuit of the Americas in Austin. He was ahead of title rival Sebastian Vettel and team-mate Valtteri Bottas.

Light rain prior to the start of the session left the circuit damp, and drivers took to the track on Intermediates, with some using the 2017-spec, and others trialling Pirelli’s prototype compound.

Red Bull’s Max Verstappen led the way before conditions improved approaching the mid-point of the session, enabling Vettel to switch to Super Softs.

Vettel, despite a tardy final sector, edged clear, though was demoted by Daniel Ricciardo after a brief mid-session lull, as the Australian put his Red Bull on top.

Verstappen enjoyed another brief spell quickest before Hamilton surged clear, consequently improving on his next run, to leave him with a 1:36.335.

Hamilton effort was over half a second faster than Vettel. While Bottas was third, via a hefty lock-up into Turn 1, which flat-spotted both front tyres.

Verstappen, newly renewed at Red Bull through 2020, wound up fourth, as the leading quartet all clocked their best efforts on the Super Soft compound.

Stoffel Vandoorne ran the Ultra Softs and went fifth. He was ahead of Felipe Massa, Kimi Räikkönen, and the Force India pair of Esteban Ocon and Sergio Pérez. They used Softs for their best laps.

Carlos Sainz Jr. got up to speed in his new surroundings at Renault and rounded out the top 10. He is in front of Magnussen, Stroll and Hülkenberg.

Sean Gelael had a couple of off-track excursions as he had another outing with Toro Rosso. Marcus Ericsson and Charles Leclerc took 18th and 19th for Sauber.

Fernando Alonso had a hydraulic problem. He appeared during the final 10 minutes for an installation lap.