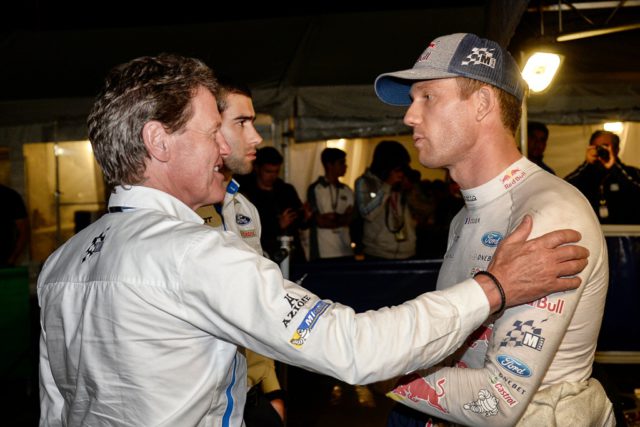 M-Sport currently leads both championships after six rounds of the 2017 WRC and will be hoping for a similarly strong performance with Sébastien Ogier, Ott Tänak and Elfyn Evans at the Rally Italia Sardegna. The team completed a comprehensive five-day test on location some time ago.

“It’s hard to believe that we are approaching the mid-point of the season. We’ve produced some fantastic results over the first half of the year and we certainly want to see that continue”, Team Principal Malcolm Wilson said.

“This is one of the closest championships that I can remember and we can’t afford to rest on our laurels. I must praise the efforts of our test team. We had a little celebration but some notable members of the team were unable to attend – our test team working hard in Sardinia and forgoing their bank holiday to ensure we are in the best possible shape for Rally Italia Sardegna.”

“All three of our drivers have good track records at this event, and it’s one that the team looks forward to every year. I see no reason why we shouldn’t be challenging for the top results once again, and everyone will be working to achieve that goal.”

Fresh from victory at Rally de Portugal, Sébastien Ogier and Julien Ingrassia will be keen to add more silverware to their collection

With a strong track record in Italy, the Frenchmen have three victories to their name and will be hoping to make it one more next week.

“We found a good feeling with the Fiesta in Portugal and we’ll be hoping to continue that in Sardinia”, Sébastien Ogier commented. “We’re approaching the mid-point in the season, and that’s where the championship will really start to heat up… quite literally!”

“The temperatures that we’ll experience are probably the highest of the year and we’ll need to be prepared for that. We had a good test where we confirmed our cooling options as well as set-up configurations for the event – so there’s no reason why we shouldn’t be confident of challenging for another strong result.”

“We’ll face an element of cleaning on the opening day, but we’ve got a good track record in Sardinia and I learned to enjoy these demanding stages. It’s not the easiest of events. You need to keep a margin and be focused from start to finish. Tire preservation can also prove really important and that could be particularly significant on Saturday with two 70 kilometer loops.”

“The aim is always to increase our lead at the head of the championship, and we hope to do that with another strong performance”, Ogier concluded.

The Estonian will be hoping to at least equal that after having rally-winning pace in Portugal.

“I feel as though we’re getting better all the time and learning more about the car every time we get behind the wheel. We had a great set-up in Portugal – the best we’ve had all year – and another test means that we go to Sardinia in a positive mood”, Tänak explained.

“The island holds a lot of special memories for me as it’s where I secured my first podium back in 2012 and we’ll be aiming to at least equal that next week.”

“We’ll need to be fully focused from the start as there are so many things to consider on an event as tricky as this one. The stages are very narrow, but also quite fast in places. There is always something to catch you out, so you need to keep that margin.”

“If that weren’t enough, we’ll also be experiencing the highest temperatures of the year which could mean more tire wear and a need to manage the situation. We got an idea of what to expect at the test, and we hope to be in a position to challenge for another strong result.”

“The plan will be to go out there and enjoy it – which isn’t difficult with these new cars!”

Toyota hopes to demonstrates its progress with Yaris WRC in Mexico

Heartbreak for Abt in Hong Kong