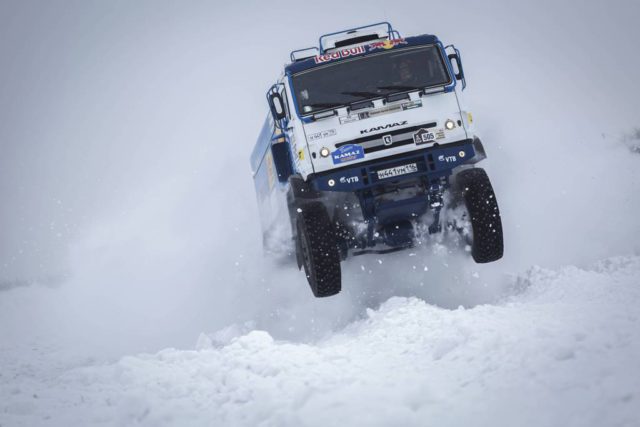 After winning the 2017 Dakar Rally in January, what better way to prepare for another gruelling endurance race in July than by testing your truck in the most extreme winter conditions. Fearless Eduard Nikolaev has proved his mettle with two Dakar wins for the KAMAZ-Master team as well as victory at the 2010 Silk Way Rally.

Ahead of another tilt at the Silk Way trophy in July, the Russian took his truck into the Transpolar region of Murmansk to give the new Continental 14.00 R20 164/160K HC tyres a rigorous workout.

Nikolaev and his team know that they cannot afford to rest on their laurels. Competition is really fierce in their rally raid category.

Consequently, they are pouring all their energy at Kamaz’s secret laboratories to perfect the 10-ton, 1,000-horsepower racing “Terminator”-truck.

For this special event in Arctic conditions, Nikolaev accelerated his 16-litre diesel monster to a speed of around 140km/h.

Once the former mechanic got his charge up to speed, he took off from a snow jump and flew through the air for over 30 metres pulling 12G.

Thankfully for the team the tyres gripped the snowy slush well, the suspension withstood the blows and, on landing, the truck carried on at maximum speed to show that they are the Kings of the Northern Desert.

“To test the truck we went to Kirovsk, in the Murmansk region, to one of the snowiest regions in Russia. There, right through to the late spring, there’s a lot of deep snow”, the 32-year-old explained.

“For our KAMAZ-4326, these conditions are very similar to driving on the sands of South America or Africa, and for the team this is great training in the skills of driving on the coming ‘silk’ dunes.” 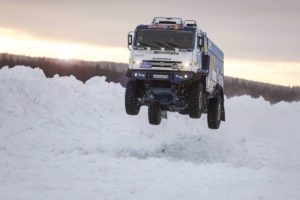 Once Eduard Nikolaev got his charge up to speed, he took off from a snow jump and flew through the air for over 30 metres pulling 12G

Now that they know the truck can withstand extreme conditions, they can turn their attention to Moscow’s Red Square on July 7. Then they begin their 9,500km route from Russia through Kazakhstan to China.

Along with their rivals, they will have to tackle 14 arduous Silk Way stages packed with extremes of temperature and gigantic sand dunes as this impressive super-truck team seeks a sixth big race victory.

Sainz: I just need adaptation to the Renault car and the engineers

Marquez: I won the race because I could convince my box to take the...