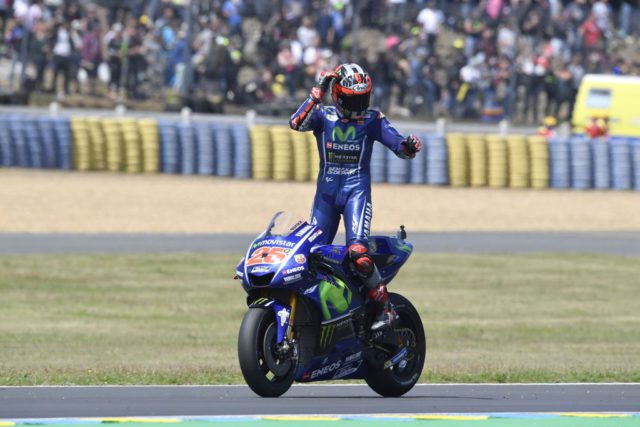 Yamaha MotoGP rider Maverick Viñales came out fighting, dominating the MotoGP field to take a sensational victory at the Grand Prix de France, sealing Yamaha’s 500th Grand Prix win. Valentino Rossi also showed a blistering pace in the French sunshine at the Le Mans Bugatti Grand Prix race circuit. He was scrapping with his teammate in an epic podium battle for the win, but suffered an unlucky fall on the last lap.

Starting from pole, he flew off the line to take the holeshot and slotted into second as he dived into turn 3, behind Johann Zarco. The Spaniard was on the case, shadowed by his teammate. With 22 laps Viñales made a textbook move on the satellite Yamaha rookie to take over the lead.

Now at the front, the Spaniard put the hammer down. He did everything in his power to escape from Zarco: managed his pace to perfection and made sure he held on to his P1 position until he got in a fierce battle with a rapidly approaching Rossi, but the number 25 rider held firm. He was leading on the last lap, when the Doctor crashed out of the race, allowing him to bring his YZR-M1 over the finish line, 3.134s ahead of his closest rival.

Teammate Rossi had a good start from second on the grid and put his Yamaha in fourth position behind Marc Marquez after the first couple of corners, only to pass the Spaniard a few turns later. With Viñales in front of him, the Movistar Yamaha men rode in tandem as they chased the leader of the race.

Outbraking himself with 16 laps to go, the Italian lost some time, which left him within the grasp of Marquez

The Doctor responded quickly to the situation and upped his pace as the Spaniard crashed out of the race, allowing Rossi to focus on the battle in front. With five laps to go, he overtook Zarco for second place, making it a perfect Movistar Yamaha 1-2, but the nine-time World Champion was hungry for more.

He planned an attack on Viñales on lap 26 and had the fans cheer when he hit the front, but it wasn’t to last. His teammate slipped back past him as the scrap continued and with the pace as hot as today’s, a small mistake from Rossi on the last lap prohibited him from reaching the finish line after a hard-fought battle.

Viñales’ first place earns him 25 points. This puts him on 85 points and in the lead in the championship standings, 23 points ahead of Rossi in third place. The 500th Grand Prix win also sees the Movistar Yamaha MotoGP Team hold the lead in the Team standings by 21 points, with a total of 147 points, whilst Yamaha remains the top manufacturer in the Constructor’s Championship by a 13 point margin, with 108 points.

You’ve got to hand it to our guys, they sure know how to keep you on the edge of your seat throughout the race. #FrenchGP #MovistarYamaha pic.twitter.com/l9Pfv7icbU

Drift, painting and wild life-acquaintance – the F1 drivers in Australia