As expected, “Fast Friday” lived up to its billing at Indianapolis Motor Speedway.

Speeds crested in the final practice day prior to weekend qualifications for the 101st Indianapolis 500 presented by PennGrade Motor Oil, despite 2.5 hours of track time lost to midday rain. When the checkered flag waved to conclude practice, Sebastien Bourdais had the fastest lap of the day and week, at 233.116 mph. 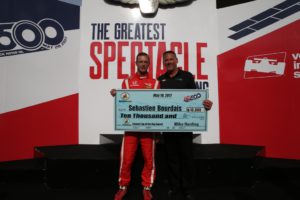 “There’s never a bad day when you’re at the front,” said Bourdais, driver of the No. 18 Dale Coyne Racing Honda.

The four-time Indy car champion ranks sixth all-time with 36 wins, but Bourdais has never qualified or finished better than seventh in six previous Indianapolis 500 starts. The 38-year-old Frenchman feels good about his chances this year.

“The car felt good,” said Bourdais, who pocketed $10,000 for being fastest on the day. “We tried a couple of things and finished the session really happy with the speed and the car balance. Hopefully it stays that way. … It’s pretty exciting just to be in the mix, knowing that we seemingly have a chance to do well in qualifying.”

Bourdais drew the 19th qualifying position among the primary cars for the 33 drivers slated to make four-lap runs in Saturday’s first day of time trials on the 2.5-mile oval. Each car is guaranteed one attempt through the qualifying line and teams may make additional attempts as time permits. The fastest nine cars at the conclusion of Saturday’s qualifying are locked into Sunday’s Fast Nine Shootout to determine the Verizon P1 Award and pole sitter for the May 28 race.

Drivers spent most of the available track time trimming out the downforce in their cars to conduct qualifying simulation runs. 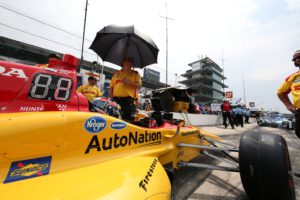 Following Bourdais atop the speed chart were a trio of Andretti Autosport drivers: Ryan Hunter-Reay, Takuma Sato and Fernando Alonso

“We had a good run today, found some things that worked and found some things that didn’t,” Hunter-Reay said. “It was definitely one of the most on-edge couple of days this whole year. It’s nice to be done with the day and we’re looking forward to tomorrow. Hopefully the weather cooperates and we can put this (No.) 28 DHL Honda at the front.”

Juan Pablo Montoya, in the No. 22 Fitzgerald Glider Kits Team Penske Chevrolet, was fifth on the day at 231.682 mph

The two-time Indy 500 champion was the only Chevy driver among the top 12 on the time sheet.

“We didn’t do a lot of laps, but we accomplished enough,” Montoya said. “We’ll see what the weather does tomorrow. If the schedule starts getting shuffled around, then we need to be ready to go when we can. Hopefully, it won’t affect us that much. I like where the car is, but we’ll find out for sure tomorrow.”

Separate incidents late in the afternoon damaged the cars of Spencer Pigot and Zach Veach, but neither driver was injured. Pigot made hard contact with the Turn 2 SAFER Barrier in the No. 11 Juncos Racing Chevrolet. Veach, rookie driver of the No. 40 Indy Women in Tech Championship Chevrolet for AJ Foyt Racing, made initial contact with the Turn 1 SAFER Barrier before coming to a stop in Turn 2.

James Hinchcliffe of Schmidt Peterson Motorsports won the Indy 500 pole position a year ago with a four-lap speed average of 230.760 mph. The driver of the No. 5 Arrow Schmidt Peterson Motorsports Honda will be the 13th driver in line to qualify Saturday. Pippa Mann (No. 63 Susan G. Komen Honda) is slated to make the first qualifying attempt. Reigning Verizon IndyCar Series champion and 2017 points leader Simon Pagenaud is in line to qualify 11th and defending Indy 500 winner Rossi 20th.

“Today was obviously a little bit stressful with the rain coming and we tried to fit as many laps as possible (before the rain),” Alonso said. “Yes, we managed to fit another two (qualifying simulation) runs late in the day. We’re quite happy. It was another day of learning those extra speeds, and hopefully tomorrow we have a good (qualifying run).”

Marquez on pole at COTA, gets a 3-place grid penalty

Ogier: It was my mistake and I shouldn’t have touched the bank