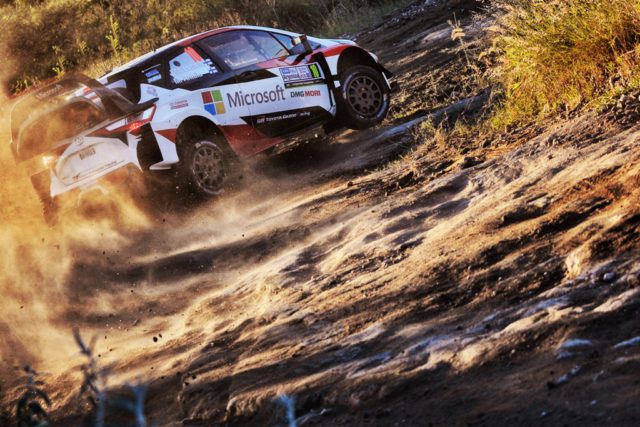 Toyota finished with both crews inside the top 10 for the second time this year, on what was widely acknowledged as the toughest event of the season so far: Rally Argentina. Jari-Matti Latvala and Miikka Anttila were fifth, while Juho Hänninen and Kaj Lindström were two places behind them in seventh, after four challenging days of action.

Both crews encountered their fair share of issues on the event, but these were valuable opportunities for the team to learn in order to improve the Yaris WRC further for the future.

“Rally Argentina has provided some hard lessons for us in some extremely challenging conditions, but we were able to learn a lot from them, so we welcome the challenges like the ones we have seen there”, Team Principal Tommi Mäkinen commented. “Both the drivers have done a fantastic job, even though they have been a bit unlucky with some of the problems they faced. Without those, they could have been even higher up the classification. However, in the end we have to be happy with the result that we take away. We are also happy with the information and knowledge that we have gained about our car in these unique soft gravel and rough conditions. We know that the Yaris WRC is basically very strong!”

Tommi Mäkinen: “We are also happy with the information and knowledge that we have gained about our car in these unique soft gravel and rough conditions”

Latvala admitted that he tried not to be a superhero but to just finish the rally.

“Our car is very tough, we can say that for sure. And we certainly improved the performance compared to the last gravel round in Mexico”, the Finn continued. “We got one point for the Power Stage and took fifth overall, but the most important thing was that we kept our consistent run of points that we had from Monte Carlo, and so the championship stays open. It’s incredible, but in all of my career I don’t think I’ve ever been this close to the front after just five rallies. Now I’m looking forward to the next test and the next rally, so that we can keep on making the car better.”

“At the end we drove quite carefully as there was some big gaps in front and behind us. So no point in taking any risks. El Condor was actually much rougher than I expected. My goal was just to bring the car back in one piece. In general this has been an extremely tough and demanding rally, with some especially rough roads. But now we have got to the end of it, scored some points, and learned a lot, so I am happy.”

Both cars to the finish, #10 Latvala 5th pos. and #11 Hänninen 7th. We are happy, learned a lot and are looking forward to @rallydeportugal! pic.twitter.com/YZJkKint3M