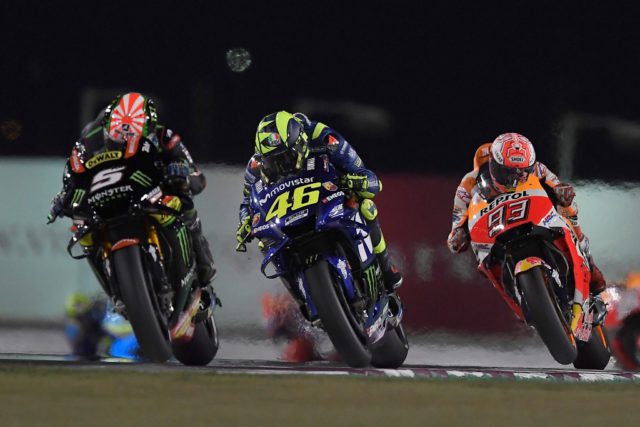 With a podium place in his grasp, he closed in on Dani Pedrosa and cruised past him at the end of the second lap on the start-finish straight, before making a textbook move, breaking hard into the first corner.

The leading pair, Johann Zarco and Marc Marquez, ran a hot rhythm, but not strong enough to shake off the Doctor. With 17 laps to go, the Italian made his move on Marquez, so he could challenge Zarco for the lead, but soon things got tense. At the start of the 11th lap, the 39-year-old went wide into turn 1, allowing Marquez and Andrea Dovizioso through, but he didn’t let it get to him.

During the final five laps, Rossi fought his way past Zarco for third. The 46-rider threw everything he had at breaking away from chasing riders. However, he was unable to get close enough to battle with Dovizioso and Marquez in the final laps and finished the first race of the season with a third place, 0.797sec from first. 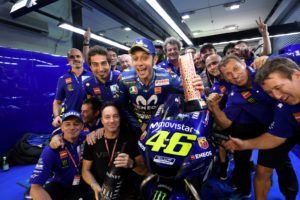 “It was a great fight and a great race. Sincerely, last year it was a bigger surprise to me – it was less expected then to arrive on the podium. With the bike from this year, I feel good.”

“This time I was more competitive and I knew I could do a good race, but you never know if it’s enough for the podium because we were with ten strong riders”, Rossi said.

“I tried to push from the beginning because I started from the third row and on the first lap I was able to overtake some guys. The other key point were the final laps when like last year the strongest on the track were Dovizioso and Marquez. I knew they had enough to change the rhythm, but I’m very happy that I could go with them and arrive at the finish line close to them, at the end. Unfortunately, it was not enough for the victory, but the podium is a great way to start.”

Viñales made a cautious start, dropping back from 12th on the grid to 15th place in the opening laps

After three laps, he got into the rhythm and started his charge. He was running the same pace as the leading group and as a result, he barged through the rider field. With Alex Rins and Jorge Lorenzo crashing out with 10 laps to go, the number-25 rider breached into the top-10. He then picked off Jack Miller on the next lap and also overtook Andrea Iannone for eighth place one lap later. 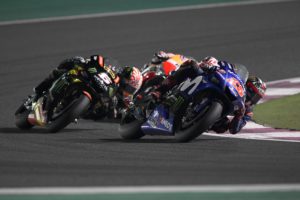 With three laps to go the Spaniard tapped onto the back of Dani Pedrosa. A lap later he overtook his compatriot and also breezed past Zarco. He gave Danilo Petrucci a run for his money for fifth place, but he ultimately had to settle for sixth position, 3.888s from the front.

“I felt really good with the bike, better than I did before. We followed the direction of how I wanted the bike and we improved so much, especially our rhythm. Now that we have done that, we know we have a good bike and we can focus on improving other things”, Viñales explained.

“Honestly, during the tests I didn’t try many starts, I was focused on the bike, so the start was bad”

“However, now we’ve recovered the feeling with the bike – especially for the race – we can work on other areas. We found a good set-up, but we can still improve and match the electronics more to my riding style, and we can also work on the starts. When you finish a race like this, you wish that the next GP would be held the next weekend. We’re quite motivated. I felt that, if I had been more towards the front today, I could have had a chance to win the race. I’m happy the team did such a great job, especially on Saturday in the afternoon. We found something good for our riding style and that‘s perfect.”

Mercedes explains: How to master Monaco