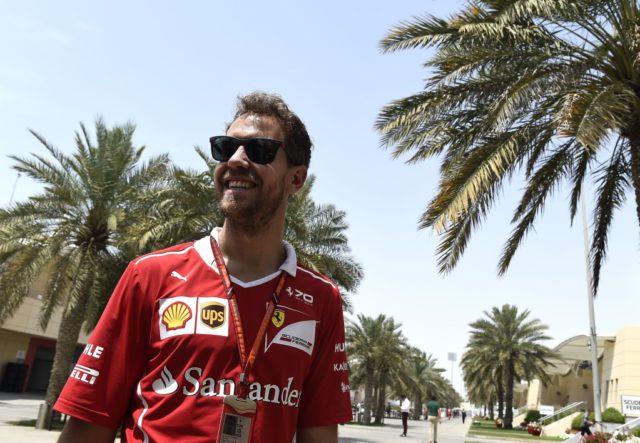 Sebastian Vettel stayed at the lead of the pack during Friday evening’s second practice session for the Bahrain Grand Prix. He was fastest also in the first training. But the three top teams – Ferrari, Mercedes and Red Bull were very close. The top 5 drivers were covered in only 0.284 s.

Ferrari set the pace on both the Soft and Super Soft runs. Kimi Räikkönen initially leading the way before Vettel took over. Vettel got down to a 1:31.310 on the red-marked rubber, significantly quicker than the times seen in FP2, where conditions were hotter.

Vettel’s car shut down some 20 minutes later, but he coasted back to the pit lane in neutral and took to the track again after checks. Valtteri Bottas finished as Vettel’s nearest challenger, 0.041s adrift, as Mercedes team-mate Lewis Hamilton endured a messy session, amid mistakes and traffic.

Hamilton aborted his first lap on Softs and Super Softs, before getting caught out by Nico Hülkenberg, which led to him locking up heavily and running wide at Turn 10. Hamilton thus ended the session back in fifth, 0.284s away from Vettel, with Red Bull’s Daniel Ricciardo and the other Ferrari of Räikkönen managing to slot ahead.

Hulkenberg, under investigation for impeding Hamilton, rounded out the top six, with Felipe Massa and Max Verstappen the final drivers within a second of Vettel. Verstappen spent a lengthy spell in the garage after replays appeared to show him running over the T-wing which fell off Bottas’ car midway through the session.

Haas’ Romain Grosjean posted the ninth best time, before complaining that “it’s all going apart” on his long run. Toro Rosso’s Daniil Kvyat rounded out the top 10. Kevin Magnussen followed in the other Haas. Esteban Ocon led Force India’s charge in 12th, edging out Renault’s Jolyon Palmer by one-thousandth of a second.

Fernando Alonso, eighth in FP1, slipped to 14th, while McLaren-Honda team-mate Stoffel Vandoorne (20th) missed most of the session due to a power unit change. Sergio Pérez (Force India) took 15th. With Lance Stroll 16th, the Williams rookie shouting that he was “in so much pain” on his return to the pits amid overheating.

Vettel tops the pile for the second time today ?

Hamilton to start the race from pit lane

Perez hoping to simply focus on his driving in 2019

Ricciardo: The initial feeling in RB14 is good

24 Hours of Le Mans: Toyota leads after the 3rd hour