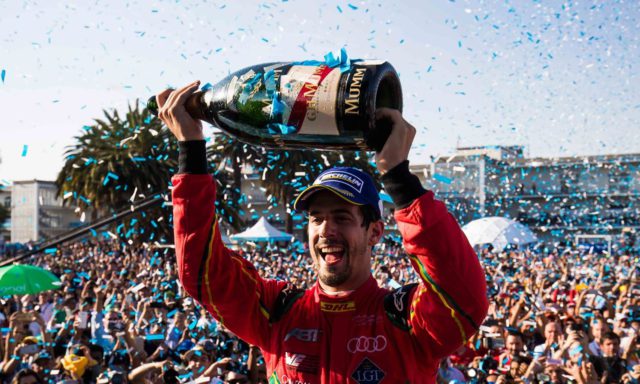 Di Grassi started from 15th place on the grid after struggling for grip on a dirty track in qualifying, and had to pit early on for a replacement rear wing, having been struck by Stéphane Sarrazin.

Di Grassi toured around at the back of the field but opted to take advantage of a Safety Car period, caused by the stranded car of Oliver Turvey on the exit of Turn 1.

Turvey had led the opening stages of the race from pole position. But he slowed along the start/finish straight due to a suspected battery problem and stopped shortly afterwards.

Di Grassi elected to pit for his car change on lap 18 of 45, along with Jérôme d’Ambrosio, also running towards the back.

Di Grassi’s lead was wiped out when Loïc Duval crawled to a halt, bringing out the Safety Car once more. But he entered energy saving mode on the restart, as d’Ambrosio defended against José María López.

López fronted the group who pitted conventionally when Turvey came to a halt. Before dropping to third behind early stoppers di Grassi and d’Ambrosio.

López attempted a move on d’Ambrosio around the outside of Turn 1. But he lost control of his DS Virgin machine and spun. He was joined by Buemi, who also erred under braking.

Jean-Éric Vergne, having unsuccessfully attacked López through Turn 3 on a handful of occasions. D’Ambrosio was nearest challenger but was unable to pass.

However, d’Ambrosio erred at Turn 1 with a handful of laps remaining, compromising his exit from the corner, enabling Vergne to breeze past through Turn 2.

Vergne quickly stormed clear of d’Ambrosio, who slowed on the final lap, but he was unable to overhaul di Grassi, who held on for an unlikely victory.

The result enabled di Grassi to close to within five points of Buemi, who finished only 14th after his mistake at Turn 1, his unbeaten start to the campaign coming to an end.

Sam Bird past Ambrosio around the outside of Turn 3 to secure the final spot on the podium. Before the Dragon racer slowed late on, dropping out of contention.

Mitch Evans took fourth for Jaguar. He survived a late collision. It was triggered by Nicholas Prost and involved both Mahindra drivers.

Prost dived up the inside of Nick Heidfeld through the stadium section, tipping him into a spin.

Evans, who slowed in avoidance, was clipped by the following Felix Rosenqvist. Whose trajectory took him helplessly into the path of Heidfeld. The pair made significant contact.

Evans and Prost both escaped significant damage to take fourth and fifth. But the Mahindra drivers were forced out, ending a promising run for the team.

López took sixth spot despite his mistake at Turn 1, with Daniel Abt seventh. He started from the back of the grid after being stripped of pole due to illegal tyre pressures.

Adam Carroll finished eighth for Jaguar, with Nelson Piquet Jr. ninth. While Techeetah debutant Esteban Gutiérrez claimed a point on his debut by rounding out the top 10.