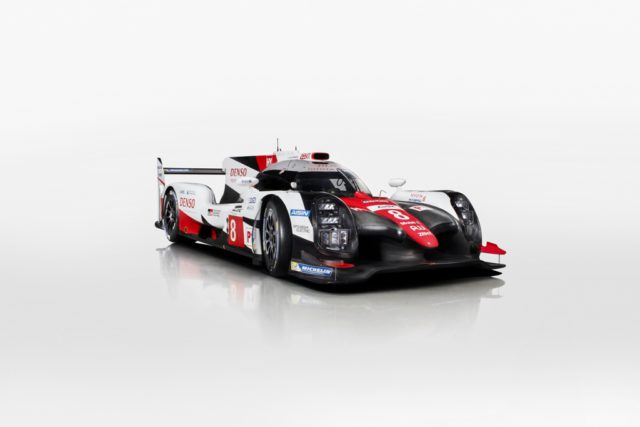 Toyota revealed the updated TS050 HYBRID race car which will carry its hopes in the 2017 FIA World Endurance Championship (WEC).

Monza in northern Italy hosted the first public appearance of the new car, presented alongside team management and the drivers of the three TS050 HYBRIDs which will compete this season.

Mike Conway, Kamui Kobayashi and José María López race the #7 for the full season, alongside Sébastien Buemi, Anthony Davidson and Kazuki Nakajima in the #8. Stéphane Sarrazin is joined by Yuji Kunimoto and Nicolas Lapierre in the #9 at Spa-Francorchamps and Le Mans.

That requires a combined effort at its technical centres in Higashi-Fuji and Cologne, with upgrades in every area of the TS050 HYBRID.

The hybrid system passed an optimization. Motor generator units (MGU) have been reduced in size and weight while the high-powered lithium-ion battery has been developed further. Those advancements in hybrid technology will directly benefit TOYOTA customers on the road, combining with the knowledge gained by powertrain engineers to create ever-better cars in the future.

To complete a wide-ranging update for the new season, engineers in Cologne have optimised virtually all areas of the TS050 HYBRID chassis, working as one team with colleagues from Higashi-Fuji.

WEC regulations for 2017 target a reduction in aerodynamic efficiency, to increase the Le Mans lap time by several seconds for safety reasons. This is achieved by raising the front splitter by 15mm in combination with a narrower rear diffuser.

Using tools such as computational fluid dynamics and wind tunnels, TOYOTA GAZOO Racing has modified its aerodynamic concept to meet this challenge; a raised nose and sharp undercut to the sidepods are the most noticeable modifications.

According to new regulations, teams are limited to two aerodynamic configurations per season, reduced from three in 2016, with the low-downforce TS050 HYBRID launched today. Tyre usage is also restricted, with each car limited to four sets, plus two spare tyres, for qualifying and six-hour races. The team has worked with Michelin to meet this challenge, including new compounds and constructions, as well as optimising the suspension geometry to limit wear. 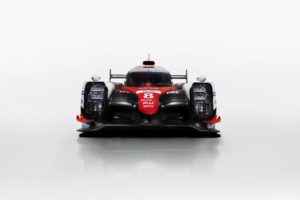 Other rule changes are designed to enhance safety

Side mirrors now need to pass a wider visibility field test while hybrid cars must display lights to indicate normal powertrain behaviour. If the green safety light is not illuminated during a race, a car will be forced to pit for repairs.

The 2017-specification TS050 HYBRID has already recorded over 30,000km in testing this year, comprising five tests, at Paul Ricard, Motorland Aragon and Portimao, and including four 30-hour endurance tests.

With an updated car and a driver line-up including former World Champions and multiple WEC race winners, Toyota heads to the season opener on 16 April at Silverstone with great determination, but expecting a close and exciting nine-race LMP1 battle with Porsche.

“The whole team is motivated and determined for this season. We want to win, there is no doubt about that, but we know it will be a tough fight with Porsche. The team in Higashi-Fuji and Cologne has worked incredibly hard to update the TS050 HYBRID and the first indications are encouraging. Having a third car is an additional opportunity and we will do our best to again deliver a great spectacle for the fans at Le Mans. We know from painful experience that Le Mans is a very difficult race to win, but that is our target. Everything – the car, the team and the drivers – has to work perfectly to achieve our goal. We will see in June if we have done enough.” 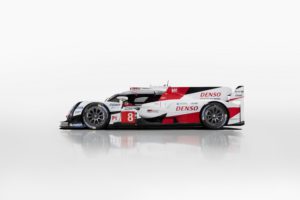 “Although the Toyota TS050 HYBRID shares the same name as the 2016 car, its performance has been greatly improved by reviewing the powertrain and enhancing efficiency in all areas. Toyota’s biggest goal for this year, as always, is winning Le Mans. The team in Higashi-Fuji has worked ceaselessly since Le Mans last year to develop a powertrain which will deliver performance over one lap and over a full race distance, enabling us to compete at the front. This has resulted in a new engine, plus modifications to the motor generator units and battery. The first results are very encouraging but we will continue to fine-tune so we are ready.”

“Our 2017 TS050 HYBRID represents a significant update; the only item which is not changed is the monocoque. At several races last year we showed the potential of our car with strong performances. But to achieve our targets we need more, so as well as big aerodynamic changes, we have optimised each area for performance and weight. What happened at Le Mans last year was painful so we gave extra attention to quality management. Zero risk doesn’t exist so we operate according to a given level of risk, which this year we have reduced. Pre-season testing has gone well in terms of performance and reliability so we feel positive but we also know we face a tough competitor.”

“This is a big season for Toyota in WEC and we are ready for the challenge. The team at Higashi-Fuji and Cologne have worked in tandem to update all aspects of the Toyota TS050 HYBRID whilst also preparing for the challenge of running three cars at Spa and Le Mans. Our targets are once again very clear; we want to compete at the front and ultimately win Le Mans and the World Championship. These are ambitious targets when faced with a formidable competitor and we know we must be on top form, with no mistakes or weaknesses. We don’t race to finish second. We race to win and embrace this challenge and working as one team will give us the best possible chance.” 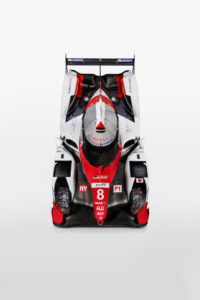 “I like the new car a lot; right now it feels very good. Now we need to see what our competitor is going to do. I feel good about the season and our car crew. I learned a lot in 2015-2016 and it has been a good journey for me so far. This season we will fight for every podium and will do our best in the #7 car. I’m sure it will be an interesting year and I’m happy as well to welcome José in our car, it’s good to have him on board and hopefully we will have a good year, especially with focus on Le Mans.”

“After last year, when we had a few disappointing races, the target is clearly to win Le Mans; that’s the first priority. And if we win Le Mans I think we have a big opportunity to win the championship as well. Both are my targets. It’s nice to be finally back in the car after the winter break. The 2017 TS050 HYBRID looks pretty good and it feels neutral in balance, which is great. I’m pretty happy, that we didn’t lose a lot due to the regulation changes. It feels that we already have a good package.”

“My biggest target this season is to learn as quickly as I can and to do the best with the team together. Driving in endurance is a first for me, especially with the traffic; I’ve never experienced that before. All of it will be an interesting challenge and I’m very much looking forward to it. It’s a bit difficult to say before the beginning of the season but I want to give everything and win races. This year’s car feels very good and it’s a lot of fun to drive an LMP1 car, it’s very powerful especially with the hybrid system.” 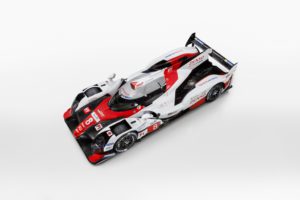 “The new car feels great, obviously it’s an evolution; last year it was a revolution. The change of regulations has triggered this, as we will lose a lot of downforce, so the team worked hard to compensate this. It feels good and we are on the level we’ve expected to be at this early stage of the season. This year the only target can be to win Le Mans finally. So the hopes and expectations are very high.”

“It’s always exciting getting in a new car for the first few times. We’ve had a change of regulations regarding the performance of the car, which was quite a big change – aerodynamically mainly. And you can tell that the engineers did a great job so far making the car feel similar to drive compared to last year, which is a good sign I think. It is a one-on-one fight in LMP1 this season; we will do the best job we can with the target to win.”

“My first impressions of the 2017 car are very good. It actually feels like a new car as the characteristics have improved. I think we will be able to fight for the championship, although we don’t know where our competitor is at the moment. I think we had the right approach as drivers and as a team in 2016; we just need to continue and always fight to get the best possible result. It was a difficult year results-wise but that only increases my motivation to challenge at the front this season.” 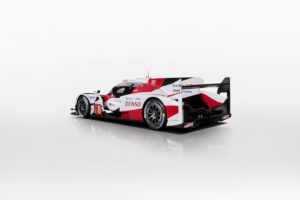 “I hope that we will again have the pace we showed last year at Le Mans, where we were the fastest car. My aim is to have a strong race and fight for the win again. We have kept the very good team spirit and this is very important; we are one team, not three car crews, so we all work well together. I am looking forward to racing again with Nicolas and getting to know Yuji. I will try to share my experience as much as possible with everyone in the team, to give us the best chance of achieving our targets.”

“The TS050 HYBRID is a fun car to drive. I don’t have a comparison with last year’s car. But I am really impressed by the acceleration and downforce; I cannot wait to race this car for the first time. I am constantly learning about LMP1 and it is also a new experience for me to be racing in Europe. It is a really exciting time and I know I have a lot of preparation to do in the next weeks. But I am happy to drive alongside Stéphane and Nicolas as I think I can benefit a lot from their experience of Le Mans.”

“It’s great to be back and I am really looking forward to being part of the TOYOTA team again. I’ve already had a warm welcome from everyone; it’s nice to work again with some familiar faces and also get to know new team members. On car #9 we have a different schedule to the other cars so we are working hard to prepare ourselves first for Spa then our main focus, Le Mans. I have enjoyed winning the LMP2 class at Le Mans for the past two years so I want to be on the podium again, this time in the TS050 HYBRID.”

Almost all parts of the 2017 #TS050 HYBRID have been upgraded…..we still think it’s a good-looking car though 😉 @FIAWEC #Toyota pic.twitter.com/sMgnNq4yCv