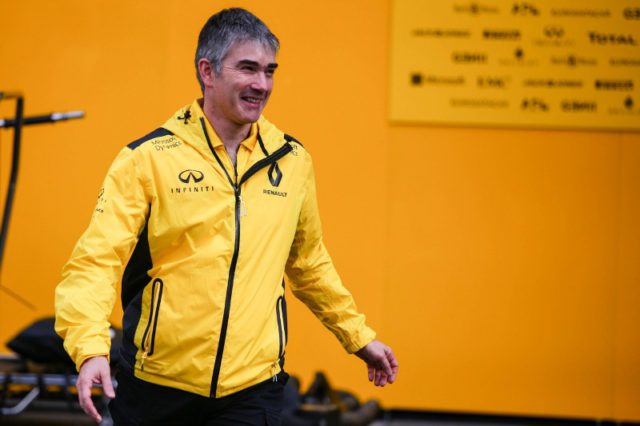 Tight and twisty, yet with a whopping long straight. It’s not just the unpredictable weather which gives the engineers something to think about in Interlagos, explains Renault Technical Director Nick Chester.

It’s an anticlockwise clockwise circuit with varying gradient and situated at quite high altitude, but not as extreme as Mexico. São Paulo is around 800 metres above sea level whereas Mexico City was over 2000. So you lose a little bit of downforce, but nothing compared to the last race. It is quite a challenging circuit to set up for because of the contrasting needs of the twisty infield and the long straight. We would like to run maximum downforce for more grip in the twisty bits. But you need to be as drag-free as possible to maximise your speed on the long straight.

It’s hard to generate grip at Interlagos so it won’t be too easy on the tyres. We will have the Pirelli soft, medium and hard compounds available but we don’t expect to see too much use of the hards. The track is bumpier than some of the smooth circuits we have visited recently so this will affect our mechanical set-up.

What type of work can still be done on the cars at this stage of the season?

Whilst most of the focus is now on 2017, we carry on doing more work on tyre management, as all teams do. It’s still a challenge as they are tricky beasts to get working in the right range so there’s more we can do and learn. We also continue work on set-ups and set-up experiments. We’ll carry on with those as they generate data that we will be able to use next year.

How would you sum up the Mexico race?

Jolyon Palmer drove a good race going from the back of the grid to fourteenth place with a huge stint on the medium set of tyres. He did his pit stop on lap 1 and did 69 laps thereafter on the same set. He put up a good fight against the McLarens, even if in the end he couldn’t quite keep them behind.

For Kevin Magnussen, it was a trickier race. He had a pretty good start and had a good stint on the soft tyres. At the pit stop, we put the medium set on the car and he lost a bit of pace. For his last stint he was on the super softs and he did enough to get ahead of the Haas cars and the Toro Rossos. His feedback was that he wasn’t happy with the balance of the car. It looks like he’d lost some downforce at the rear. We are investigating that ahead of Brazil.

There are only two races left of the season, what are your thoughts going into them?

We have proved that we are able to capitalise on any given opportunity during the races so our aim is to continue to do that and finish the final two Grands Prix in the points.

Perez a bit disappointed to miss a podium in Singapore