With the winter break behind us, MotoGP is starting up again with the Qatar night race, as per tradition. The Losail International Circuit will host the first race of the 2019 World Championship season from March 8 to 10.

Located 14 miles north of Doha, the track cost $60 million to build and was inaugurated in October 2004. Even though it is in one of the hottest spots on the planet, the track does not pose any particular problems related to temperature because the race starts at 8 pm, after the sun sets.

The temperature of the asphalt came in at 73.4°F in 2018 and 82.4°F in 2015. And since it is a night race, it is possible to see the glowing carbon brake discs in the more aggressive braking manoeuvres.

According to Brembo technicians, who work in close contact with all of the MotoGP riders, the Losail International Circuit falls into the category of tracks that present a mid-level difficulty on the brakes.

On a scale of 1 to 5, it earned a 3 on the difficulty index, which is the same score assigned to nine other tracks.

Brake use during the GP

The 16 curves on the track require using the brakes at 11 points. This is the reason why the riders use their brakes 242 times from the starting line to the checkered flag, the highest value of all asian circuits.

The average deceleration is 1.2G and is consistent with the majority of the other tracks in the World Championship.

Summing up all of the force applied by a rider on the brake lever from the starting line to the checkered flag, the result is almost 2,100 lbs. Compared to a Superbike, this is over 1,100 lbs more than the overall load Alvaro Bautista applied on the lever in the first race of the first round in Australia. 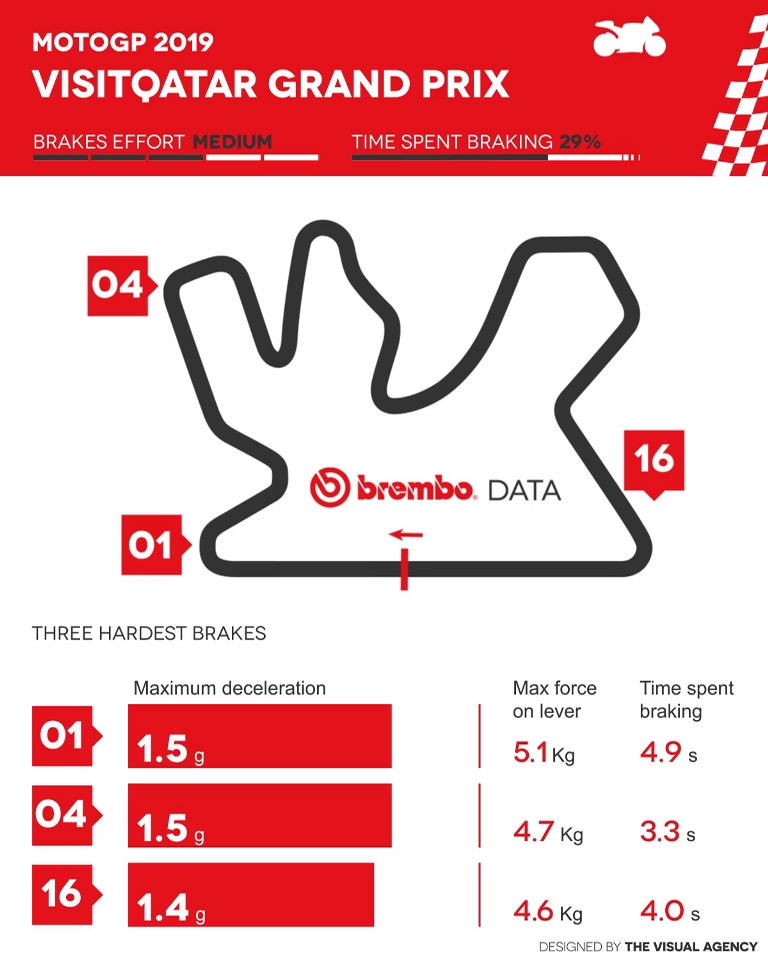 The most challenging stops

Of the 11 braking sections on the Losail International Circuit, three are very challenging on the brakes, five are of medium difficulty and three are light.

Contributing to making the braking section at the first corner after the start the second most difficult in the entire World Championship is the 0.66-mile straightaway that precedes it. The MotoGP bikes approach the corner going over 217 mph and have to slow down to 65 mph applying up to 11.2 lbs on the brake lever. To set up the curve, the riders brake for 4.9 seconds and travel 0.166 miles. The pressure on the braking system reaches 11 bar.

The last corner on the track is also challenging because the riders brake for 0.11 miles. The motorcycles reduce their speeds by almost 93 mph and the riders experience 1.4G of deceleration, which is almost 0.1G more than a Porsche 911 GT3 registers in braking from 124 mph. The MotoGP braking system reaches 9.9 bar in pressure on this section of the track.

Higher values of deceleration (1.5G), load on the lever (10.4 lbs) and pressure on the system (10 bar) as on turn 4: braking lasts 3.3 seconds because even though the bikes approach the curve faster, they enter it going 74.6 mph.

All of the 15 Qatar GP races contested up to now have been won by MotoGP bikes with Brembo brakes. The most winning team is Yamaha with 8 victories, followed by Ducati with 4 wins.

Both Casey Stoner and Valentino Rossi have taken first place four times, but last year Rossi placed only third. Jorge Lorenzo has a total of 11 podium spots and eight pole positions on this track and he won three of the last seven races held here.

Perez: It is fair there is no number one driver in Force India