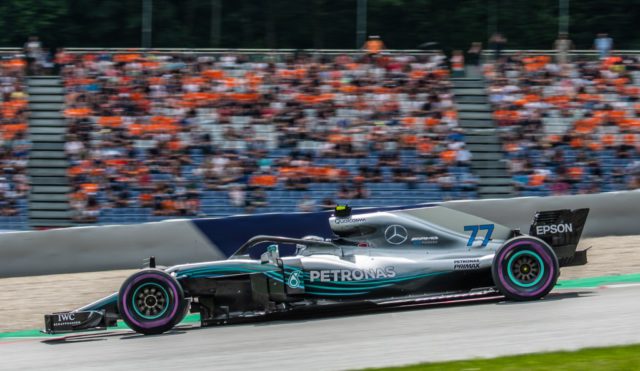 Valtteri Bottas has claimed his first pole position of 2018. He beats championship favourites Lewis Hamilton and Sebastian Vettel to top spot in qualifying for the Austrian Grand Prix.

The Finn was just 0.019 seconds quicker than his Mercedes teammate, who made a mistake on his first run and just failed to match Bottas on his second.

Ferrari’s Vettel was third but 0.334 seconds behind, while teammate Kimi Raikkonen took fourth ahead of the Red Bulls of Max Verstappen and Daniel Ricciardo.

Williams have had a miserable campaign so far this year, with qualifying particularly painful. However, Lance Stroll gave the team some respite by sneaking into Q2 in the closing stages at Red Bull Ring.

There wasn’t so much luck for Sergio Perez, the only non-Ferrari, Mercedes and Red Bull driver to score a podium this season, as the Force India man failed to extricate himself from the drop zone.

Fernando Alonso left it late to leap to safety, but his McLaren team mate couldn’t repeat the trick. He ended up 15th, with the other Williams of Sergey Sirotkin and Sauber’s Marcus Ericsson joining him for an early bath.

Up front, Ferrari opted for a different tyre strategy than rivals Mercedes and Red Bull as they sent Vettel and Raikkonen out on supersoft tyres rather than the ultrasoft tyres.

They had no trouble getting through, with Raikkonen third and Vettel sixth, with Mercedes continuing their dominance in the Austrian hills with Bottas getting to within a tenth of pace-setter Hamilton.

Mercedes and Red Bull mixed things up in Q2 by opting to run the supersofts, while rivals Ferrari went straight to the ultrasoft. Hamilton and Bottas slotted into the top two slots with ease, but it was so easy for Red Bull.

Verstappen slotted into fifth, but Ricciardo’s first effort was only good enough for 11th as he struggled for front grip. After a cool-down lap, he went again and improved to ninth – but was forced to go out again.

Everyone bar Verstappen and Grosjean – such was the pace of Haas – headed out for a second run, with Vettel fitting a fresh set of ultrasofts to snatch the quickest time.

However, the four-time world champion is under investigation for allegedly impeding Sainz, who was on a hot lap when he appeared to get baulked by the slowing Ferrari.

Ricciardo went slightly quicker to take eighth. While the Renaults of Sainz and Hulkenberg hauled themselves out of the drop zone in the closing moments at the expense of Force India’s Esteban Ocon and Toro Rosso’s Pierre Gasly.

Leclerc was a strong 13th, seven places higher than Ericsson. But he will start Sunday’s race 18th having picked up a five-place grid penalty for a gearbox change after problems in FP3.

Alonso looked like he might edge into the top 10 shootout. But he ran well wide at the penultimate corner and did the same at the final corner. He exited qualifying along with Stroll.

Bottas appeared to have ripped up the formbook in the early part of Q3. He topped the times by a staggering half a second. However, replays showed Hamilton got out of shape at the top of the hill at Turn 3. While Vettel ran wide at Turn 4, leading both to lose a bunch of time.

Raikkonen popped into second to make it a Finnish one-two with Grosjean delivering a stunning lap to take fourth. He was nearly one second clear of Haas team mate Magnussen in eighth.

There was tension at Red Bull as Ricciardo was told to “get on with it” on his out-lap after the Australian said there was no point “punching a hole” and giving a tow to team mate Verstappen.

Neither could beat the Haas of Grosjean after the first run, slotting into sixth and seventh respectively. After stopping for a fresh set of tyres, everyone headed back out for a final run.

Vettel moved up into second, but he was no match for the Mercedes – who both improved. However, it was Bottas, rather than Hamilton, who nailed the best lap of the day.

The Finn secured his first pole position of the season, 0.019s ahead of Hamilton. Vettel and Raikkonen locking out the second row for Ferrari.

Rosberg wins in Singapore, takes the lead in the championship

Ricciardo: The initial feeling in RB14 is good