Michelin’s next assignment on the MotoGP calendar will be a short journey over the French-Spanish border as it heads to the Circuit de Barcelona-Catalunya for round seven of the championship and the Gran Premio Monster Energy de Catalunya. 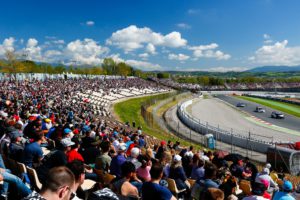 The 4,627m circuit has undergone a complete resurfacing process since last season and a recent test at the track confirmed the tyre selection that Michelin will take to the event. The pre-season information that the track was to be re-laid meant Michelin initially allocated a choice of four front and four rear Michelin Power Slicks for the race weekend. But the data gathered during the test last month meant that this was narrowed down to three of each, in keeping with the usual allocation at other MotoGP events. The three front slick tyres in a soft, medium and hard compound will all be symmetric in design, whilst the three rear slicks – also in soft, medium and hard – will feature a harder right-hand-side, giving them an asymmetric performance to cope with the eight right turns that the track possesses, in contrast to just five lefts.

The Circuit de Barcelona-Catalunya opened its doors to motorsport in 1991. It is one of the arenas with best design of the modern era. With elevation changes, hard-braking zones, fast-flowing corners, a straight over one-kilometre long, and all this located just 25km from the vibrant city of Barcelona, it is a track that provides plenty of excitement both on and off-track, all of which will lead to a capacity crowd in excess of 100,000 fervent and colourful fans packing the grandstands on race-day.

“The show will be fantastic!!!”, its Álex @Rins42 word! #CatalanGP #MotoGP
Get your ticket now! https://t.co/XaDwYsQHb6 pic.twitter.com/mq3cZE2xcg

Michelin will not only confront the new surface in Catalunya, but there is also a new configuration for this season

In the past two-years, the layout changed during the race weekend for different reasons. But 2018 will see a revised layout, with increased safety areas, used for the first time in MotoGP. This will mean that there will be new records for the best race lap, fastest overall lap, top-speed and race duration. The race will also have a new distance, as it is one the seven events to have a reduction in laps this year, which will see it reduced to 24 circulations this season, from 25 in previous years.

The Michelin Power Rain tyres complete the range. These will be soft and medium compounds for both the front and rear.

Michelin and the MotoGP field takes to the track on Friday 15th June for the first two Free Practice sessions. Saturday will see qualifying take place as the 24 riders battle it out for the best grid positions. The main event will get underway at 14.00hrs local time (13.00hrs BST, 14.00hrs CEST, 12.00hrs UTC) on Sunday 17th June, for what promises to be another great MotoGP battle.

“Catalunya was another track that we had little knowledge of what to expect when we made the plan for tyre allocation before the season had started. The recent test we had there – which featured almost the whole MotoGP field – has changed that and given us a clear plan, this has allowed us to make the decision of what tyres we need to bring to cope with the new surface and layout. It was a very positive test and the riders gave some good feedback, which has enabled us to choose the specific compounds which are ideally matched to the new asphalt.”

“The times were very fast, even though we were comparing them to the older layout, so we expect some very quick laps this weekend. This is always one of the best events of the season and the track gives some thrilling racing, so we hope we can play a big part in that excitement by supplying the riders with the optimum tyres to give them the best performance possible.”

Put the hammer down ?