Idris Elba explores his “lifelong obsession” for cars in a new film for Grand Basel, the ultimate show for automotive masterpieces. Grand Basel will commence a global tour starting this September. And the movie provides an exclusive visual preview. Elba is a multi-award winning actor as well as a notorious automotive aficionado. Thus he is the perfect choice for the adventure.

In the film, Idris explores the characteristics of a car that make it a masterpiece. He is also searching for an answer as to what gives a car its soul. The setting of the movie is highly significant, as it was the iconic Lingotto automobile factory in Turin.

The actor reminds the viewers of the connection between the automobile and art, design, architecture and lifestyle. Idris Elba explores the emotional impact of the automobile, including his earliest motoring memories of pretending to drive in the back seat of his parents’ car.

The intangible effects of the automobile also get an expression in the choice of director. That is Elias Ressegatti, a Swiss-born, Los Angeles-based filmmaker who received high praise from motoring and movie critics alike for the 2017 release of his Future Classics series. The mini-documentaries capture stories from Southern California car culture. The visual profiles pay tribute to the bond between treasured dream machines and their owners.

Idris has extensive experience with a multitude of automotive communities. He gained it while filming his No Limits and King of Speed series. And that experience means he is the perfect advocate for the presenting the car as a cultural asset. In the new film for Grand Basel, he presents four of the event’s exhibits that reflect the past, present and future. 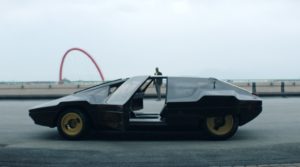 Filming of the new Grand Basel film took place at the avant-garde Lingotto building on Via Nizza in Turin, Italy

Lingotto’s rooftop is an automotive industry icon in its own right. It has architectural significance – championed by Swiss-French legend Le Corbusier as “one of the most impressive sights in industry”. It famously featured in the getaway sequence in The Italian Job, where the red, white and blue Mini Coopers are pursued by the police in an Alfa Romeo Giulia.

Idris himself takes to the rooftop in the new film, driving the remarkable 1978 Lancia Sibilo Bertone. That is a unique prototype with an unmistakable monolithic wedge design by Marcello Gandini. He also gets behind the wheel of the bold 2015 Zagato Mostro. The latter was a creation of the Zagato Atelier. It appeared as a tribute to the 1957 Maserati 450S Costin-Zagato Coupe nicknamed ‘Il Mostro’.

Also featured in the film is the beautiful one-off 1931 Alfa Romeo 6C 1750 GS Zagato. It features a bespoke body by Giuseppe Aprile. There’s also the elegant 2018 GFG Sibylla, created by Giorgetto and Fabrizio Giugiaro in partnership with the smart energy management company, Envision.

The Lancia and Alfa Romeo are both parts of the breathtaking Lopresto Collection. Corrado Lopresto assembled the collection. The Milanese architect focuses on rare cars, prototypes and unique pieces from Italian manufacturers and coachbuilders. The extraordinary collection of cars has received an unrivalled number of accolades from expert judges.

The new film with Idris Elba previews the first Grand Basel show, which will debut in Basel in September 2018

Grand Basel will be curated by leading voices from the automotive, arts, culture and design sectors.

Exceptional automobiles will be in an exceptional setting, thanks to a bold and contemporary exhibition concept. Its homogeneous design forgoes the often nostalgic ambience of established car events. In this exhibition, people can admire the motor cars in a surrounding reminiscent of modern museums.

“Grand Basel is the first global show for the world’s most important and valuable automobiles of the past, present and future,” says Global Director Mark Backé, who conceived the show idea. “It presents an international audience of connoisseurs, collectors and enthusiasts with the epitome of automotive culture, aesthetics and technological sophistication.”

“What makes a car a masterpiece?” Idris Elba looks at the meaning of soul in our celebration of excellence in motion with our Grand Basel film. https://t.co/gR7VPw6xsc #GrandBasel #IdrisElba #drivesoulfully pic.twitter.com/zWsZVBFlXQ

His latest appearance was during the weekend of the Formula E Paris ePrix. And he got the chance to drive the real race car!

“It was wicked, man – a really good ride, not much suspension, so, err, it’s lucky I’ve got some padding on the old buttocks but other than that, it was good!”, the actor told fiaformulae.com.

“I can’t even remember what JEV [Jean-Eric Vergne] was saying! He was like do this, do that but actually, he was saying don’t go flat out in the corners, so I didn’t do that, you don’t want to do that in this car but in the straights, man, I maxed it! The cameras were going and I was like, ‘can they see me doing 130mph?’ but I was probably doing 70mph but it felt really fast!”

“I’ve followed Formula E for a little bit now, it’s a really exciting time. New brands are coming in, new car makers with teams, it’s good. It’s a good time, man – I’m excited for it. I’m just thankful that I got a chance to ride in the car, it’s great.”

Bottas on pole for the Russian Grand prix

Gasly is not afraid of the F1 stress: I am used to pressure since...

Hamilton: The fresh engine put us back in line with everyone else who took...