Next up in the 2018 MotoGP championship is the sold-out fifth race of the 2018 World Championship at Le Mans scheduled for May 18-20 – the French MotoGP.

The French circuit was built in 1965 around the 24 Hours of Le Mans track, with which it shares a third of the track. Named for Ettore Bugatti, the circuit hosted the 500cc class of the World Championship for the first time in 1969, but it has been a permanent site of the French GP only since 2000.

The track is 4,2 km long and in 2016 October it was completely repaved for the first time in 12 years. The new pavement guarantees better grip, which would enable the bikes to discharge more braking torque than in previous years.

The straightaway at the arrival is only 674 meters long but since there are lots of other straightaways, the riders can easily cool down their Brembo carbon discs. To ward off the opposite risk, many of the riders will probably adopt brake discs with a low braking surface.

Brembo has made carbon discs available to all the riders. These discs come with a diameter of 320 mm and 340 mm, and with a high and low surface to ensure the right range of operation, in terms of temperature, on every stretch of the track.

More specifically, the 340 mm discs with a low braking surface have similar thermal properties as the 320 mm discs with a high surface, but when the diameter of the disc is varied, it is possible to generate greater braking torque at the same operating pressure.

If it rains the riders should choose carbon discs aptly protected by custom covers that serve to guarantee the carbon discs the correct range of operation, in terms of temperature.

According to Brembo technicians, who for the third consecutive year are assisting all of the MotoGP riders, Circuit Bugatti presents a medium level of difficulty on the brakes. On a scale of 1 to 5, it earned a 3 on the difficulty index, the same score given to eight other tracks.

Every lap, the riders turn to their brakes nine times for a total of 29 seconds. Only Sachsenring and Valencia are shorter. Riders use the brakes for 32% of the overall duration of the race, which is one of the highest percentages in the entire 2018 World Championship.

The 1.17 G average peak deceleration per lap is also significant and is higher than the deceleration experienced in a supercar like the Chevrolet Corvette Z06.

Summing up all of the force applied by a rider on the Brembo brake lever from the starting line to the checkered flag, the result comes in at more than 120 kg, the same figure reached at Aragon and Motegi. Practically speaking, that means a rider has to apply about 28 kg of force every minute of the race. 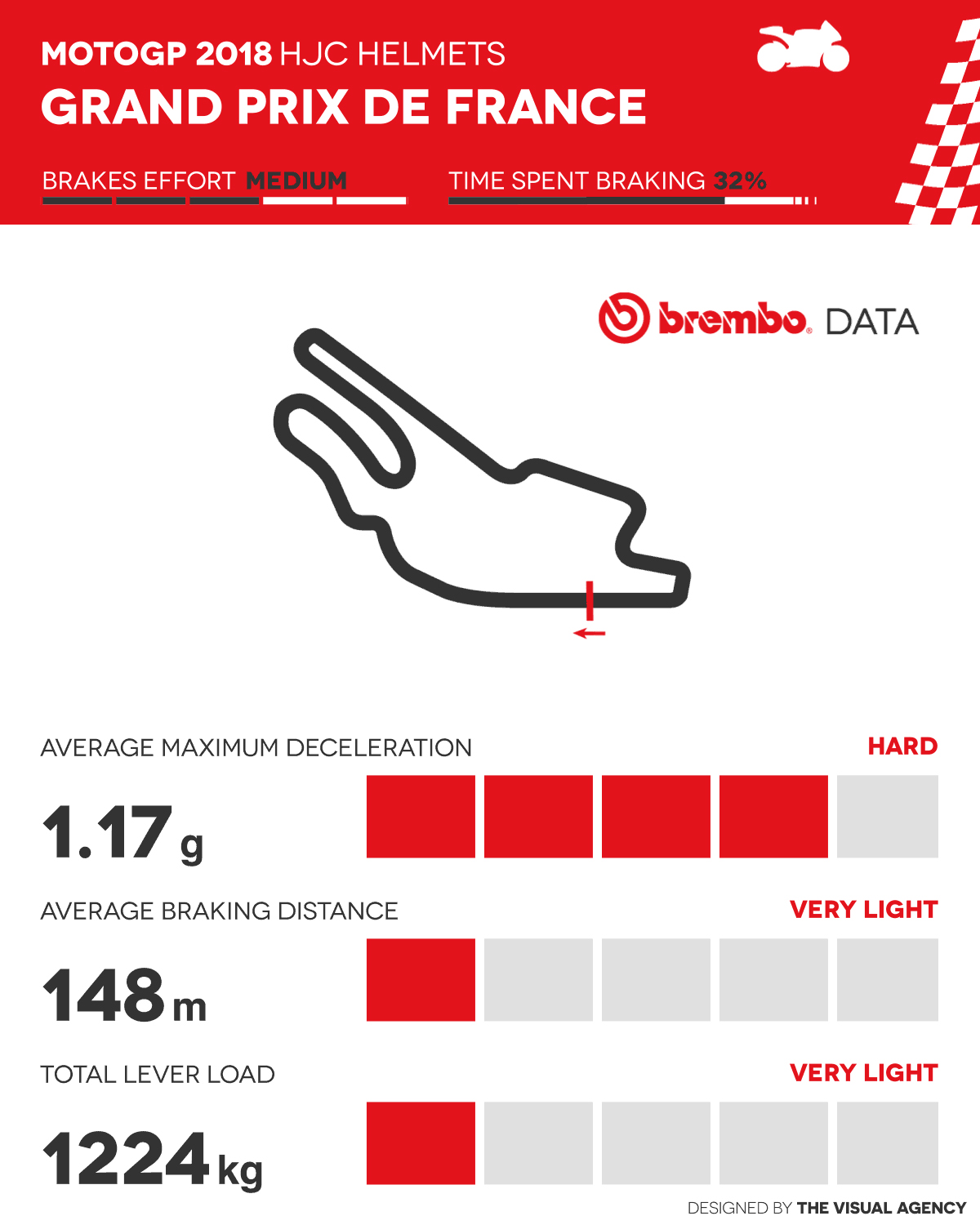 Of the 9 braking sections at Circuit Bugatti, 2 are classified as demanding on the brakes, 3 are of medium difficulty, and the remaining 4 pose only a light challenge on the braking systems. The two toughest corners are in numerical order (turns 8 and 9), although a fairly long straightaway separates them.

The most difficult braking section is at turn 9: the MotoGP bikes enter the area at 294 km/h and brake for 4.5 seconds in 239 meters to decelerate to 107 km/h. At this point, the riders apply a load of 6.6 kg lbs on the brake lever and undergo a deceleration of 1.5 G. The 11.5 bar of pressure that the Brembo HTC 64 T brake fluid reaches is just as impressive; it is twice the amount of pressure in a bottle of champagne.

Turn 8 is another challenge for the brakes, although the motorcycles enter it a bit slower. They go from 250 km/h to 82 km/h in 4.2 seconds in a space of 183 meters, which is equal to the height of the Tour Triangle that is being built at the Porte de Versailles. Here too the deceleration is 1.5 G, but the load on the lever is “just” 6.4 g.

Brembo brakes have won the last 24 French GP races, including the 18 contested without interruption on Circuit Bugatti. Of the last six races, Spanish riders won every time. Jorge Lorenzo holds the record for MotoGP with five victories, followed by Valentino Rossi with 3, but the last one was in 2008.

The first rider to ever win on this track was Giacomo Agostini in 1969. At the time, Brembo brakes even were not in competition racing. But in the 1980s, the Italian rider chose Brembo brakes for the Yamaha team he managed in the 500cc class.

Raikkonen heads Hamilton in the second practice in Belgium

A piece of Michael Schumacher history goes to auction for charity