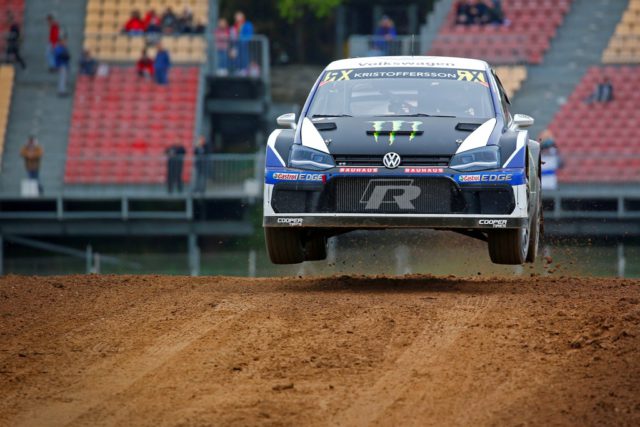 Johan Kristoffersson won the first round of the World Rallycross Championship at the Catalunya circuit in Spain. His victory came after the disqualification of Mattias Ekstrom for a crash with Petter Solberg at the start.

BREAKING: Mattias Ekstrom has been disqualified from the Final which means that Johan Kristoffersson wins the World RX of Catalunya-Barcelona!

Ekstrom first crossed the finish line but the result was provisional while stewards investigated the incident. He and Solberg made contact on the run to turn one, resulting in the latter being pushed to the inside and into the track markers to bring him to a stop. With Ekstrom continuing in the lead, he’d go on to resist the race-long attentions of Solberg’s team-mate Kristoffersson to win on the road.

The stewards reviewed video evidence and talked with the drivers.

They determined Ekstrom to be at fault and disqualified him from the final, promoting Kristoffersson into first place

As a result, Ekstrom is classified with no points from the final race.

Behind Kristoffersson, Sebastien Loeb completed a remarkable turnaround to secure a second place finish. Loeb was initially set to miss out on progressing beyond the qualifying races after issues in Q2 and Q3 left him 13th. Then Kevin Hansen in the sister Team Peugeot Total 208 withdrew before securing the top three semi-final finish he needed to make the final. That promoted Loeb further.

Once there, an early Joker Lap gave Loeb the edge over Andreas Bakkerud to complete an unlikely second place finish ahead of the Norwegian, who spared some blushes for Audi by inheriting a podium finish on his debut with the team.

Making only his second career appearance in a World RX final, Niclas Gronholm gave the new GRX Taneco Hyundai i20 a fine debut. He was fourth while Solberg finished sixth.

Crutchlow: We got lucky at Misano but I don’t really care because we did...