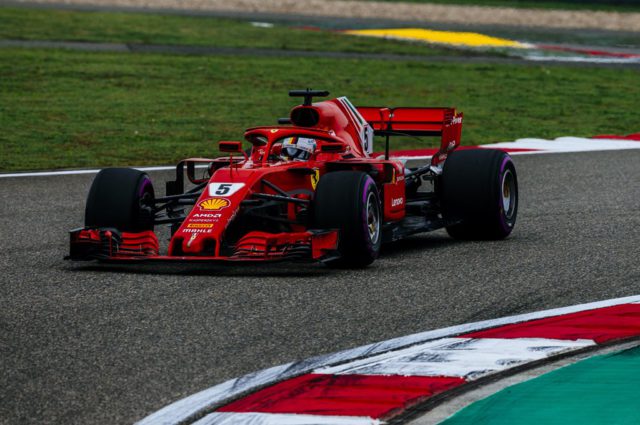 Sebastian Vettel edged Kimi Raikkonen to claim back-to-back front-row lockouts for Ferrari, ahead of Valtteri Bottas. After Raikkonen had lead the opening exchanges of Q3, Vettel sneaked into pole position. He set a new track record of 1:31.095, beating the Finn by less than one tenth of a second.

Raikkonen had been on course to make improvements on his second timed lap, but a poor final sector opened the door for Vettel to take his second consecutive pole position. Mercedes looked like they were struggling to match Ferrari’s pace throughout the qualifying hour, and Valtteri Bottas’ best lap was over half-a-second away from Vettel’s time.

Both Ferrari and Mercedes elected to set their Q2 times on the soft tyre, meaning that all of the top four will start the race on the soft-compound tyre.

Red Bull Racing, meanwhile, will start the race on the ultrasoft tyre after qualifying on the third row. With Max Verstappen finishing ahead of Daniel Ricciardo. After a power unit problem in free practice three, Ricciardo’s team faced a race against time to complete a power unit switch in time for qualifying.

The team managed to assemble the car and Ricciardo was able to scrape through into Q2. And he continue a relatively normal qualifying session. Nico Hulkenberg lead a successful double-Q3 session for Renault, beating Force India’s Sergio Perez, team-mate Carlos Sainz, and Haas’ Romain Grosjean in the midfield battle.

The second Haas of Kevin Magnussen failed to progress into Q3 for the first time this season. But in starting eleventh he’ll be the first driver to have free choice of tyre.

Esteban Ocon finished the session in twelfth place, ahead of the two McLarens of Fernando Alonso and Stoffel Vandoorne. Toro Rosso’s Brendon Hartley managed to edge into Q2 for the second time this season.

The two Sauber’s finished at the foot of the time sheets. Charles Leclerc out-qualified his more experienced team-mate Marcus Ericsson.

Loeb: “I knew I could drive, but could I reach the top level again?...

Bird and DS Virgin content with their third consecutive podium